Today was a good day

Normally the egg retrieval day is one of the worst for me as I've tended to have disappointing results. There was the first IVF where six promising follicles only led to two eggs, followed by the second where only a single egg was collected. My previous cycle was somewhat better with four eggs retrieved. At my old clinic we wouldn't be told how many eggs there were until the appointment with the doctor a few hours later and it was always an agonizing wait!

At my new clinic the doctor told us the egg number immediately after! Such a nicer way of doing things. So I was recovering from the procedure while feeling really happy as this time around, I got five eggs!! Best result yet. Such a relief as after my previous appointment I was terrified we might only end up with one or two. I wasn't in any pain after and generally have been recovering well. The plan is that the clinic will phone to let me know how many of the eggs fertilized. If we have three or more embryos then we will go for a transfer on day five, otherwise day three. The doctor told me that if we end up with only three embryos then it is likely only one will survive till day five. So as usual probably no leftovers to freeze.

I enquired about my thyroid value as it was tested at my last visit. And I could hardly believe it but the TSH value has gone down to 0.9?! Isn't that amazing? It had been 3.11 two weeks ago and I'd even considered postponing our IVF start because of it. Today has just been a really good day. The doctor I had this time (there are about five different ones at the new clinic) commented on how much she loves my accent and hearing me speak which was sweet! 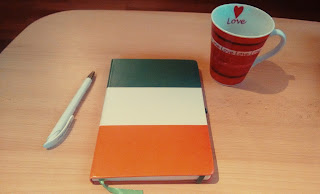 I'll be kept busy the next while keeping up with all the injections and meds I have to take at certain times during the day so it's just as well I have an IVF diary where I've been writing it all down to keep track. As you can see from the picture, it has the Irish flag on the cover! I saw it and thought I could do with the extra "luck" of the Irish, haha! It came with a green pen as well.
Posted by dubliner in Deutschland at 10:00 AM