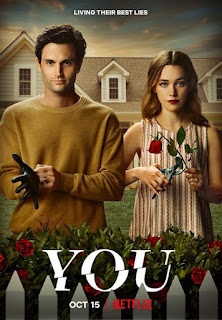 We recently watched the third season of "YOU". It's a good show. It centers around a guy named Joe Goldberg who becomes fixated on certain women in his life and does a lot of creepy stuff. And worse. He's not someone I'd want to know for real!

He does have a sad backstory and can be quite sympathetic at times so that you almost forget he's basically a sociopath. I'd describe it as a dark comedy.

It can be difficult for TV series to continue to be as gripping after the initial season but so far it has remained entertaining.

What struck me though, was how the characters in the third season speak about the Covid-19 pandemic as if it is already over. I guess when they were filming the show, they assumed life would be totally back to normal by now..

No such luck!
Posted by dublinerinDeutschland at 5:09 AM 2 comments: