Over a month has passed now since our wedding. We both had an absolutely amazing day and loved every minute of it. In fact if I could re-live it over again I would. What they say is true, the day goes by an an unbelievable speed.

What did I love about it? It was just so nice to be surrounded by family and friends on such a special day. And also seeing all the hard work planning the wedding finally pay off! A lot of people travelled from all over to be there for the wedding which we also really appreciated. My brother and his girlfriend flew from Australia which was the furthest distance. But we also had a lot of friends there from Germany. And the great thing about the day was that everyone was mingling, I didn't even have to worry about making introductions. We had 80 guests which I felt was a perfect number for us. 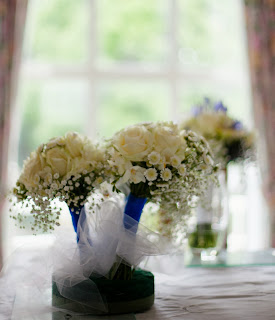 In the morning I enjoyed getting ready with my bridesmaids. We all had a glass of wine at the hairdressers, and it felt strange to be drinking at 10am! Everyone looked gorgeous. It was my first time seeing the girls in the dresses I had picked for them. Then in the house the photographer took some photos and all too soon the car had arrived and it was time to go! Our wedding ceremony was at Trinity college Dublin and being August there were loads of people sightseeing there. When my Dad and I got out of the car outside the chapel there must have been about 50 tourists standing around taking my picture! I found that a bit overwhelming as I was already feeling nervous at that stage! But I turned around and gave them all a little wave before making my way into the church and they all clapped and cheered which was nice.

Walking up the aisle I burst into tears, and the GerMann was also teary eyed. The ceremony itself was beautiful. The sun came out and we got some fantastic pictures outside before it was time to go on to the hotel. The GerMann and I had a moment just the two of us travelling by car to the hotel which was lovely. Then in the hotel we were able to chat to people at the reception drinks a little before the meal. After the dinner there were three speeches, father of the bride, the best man and the groom and I thought everyone did a fantastic job. 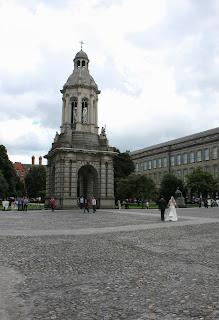 After the dinner it was time for cake and dancing! We hadn't rehearsed the first dance at all but amazingly it went really well and people told me afterwards that it looked like we had taken lessons. And then the rest of the night was spent living it up on the dancefloor and chatting to people. It was all over too soon. The next day we had a lunch at my family home with the GerMann's family and we ate leftover wedding cake for dessert. The following day we flew off on our honeymoon.

There is lots to get used to now, having a husband, being a "Mrs", having a new surname! At the wedding dinner, after the meal, one of the waiters asked me if my husband takes milk in his coffee and it sounded really strange to me, "my husband!". It's sad in a way that the wedding is over now, but we have some beautiful photos, and a lovely video that my cousin made and lots of memories.

Once I got back to work everyone shook my hand congratulating me on being married. And I think I am expected to bring a cake in. Better get on that soon! Getting our marriage recognized here was interesting. We went to our local "Bürger büro", citizen's office and handed in our wedding certificate only to be told, it will have to be translated as they don't accept non German documents. 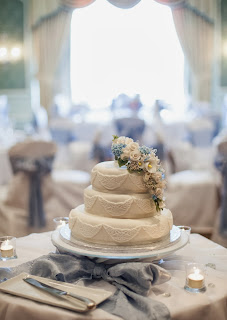 So then we email a translator for a quote and it's going to be 100€. Yikes. The GerMann phones the Standesamt and finds out there is another option where you don't need a translation but you need your birth certs but they cannot be more than 6 months old and it costs about 70€ and it takes 4 weeks. Okay..

Anyway, then we decided to try going to a different Bürger Büro as we heard that it can depend on the person you get, sometimes they are nice about it. So we go in to a different one and hand in our marriage cert and it was no problem at all, the lady there just accepted it as it was in English and had no issues with it and didn't charge us anything!

The next big project is to send out all the thank you cards and then to create a wedding album. And in the meantime we have also started house hunting. Buying a house actually feels like a bigger commitment and a more difficult decision than deciding whether to get married, funny that! 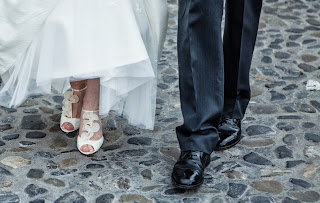 Posted by dubliner in Deutschland at 10:45 AM No comments: