There's been a reason for my radio silence lately. It has been an eventual few weeks. I had to get surgery and I was in hospital for over a week!

Back during my pregnancy you might remember I wrote about a health scare when I was having strong cramps on my right hand side and my gyno, worried it could be my appendix, refered me to a specialist. The pain ended up going away by itself though it happened a second time during the pregnancy and afterwards so I ended up going back and forth to the doctor several times.

Two weeks ago the cramps returned again even worse and the doctor sent me directly to the hospital. I'm not going to share all the medical details right now on the blog but I ended up needing major abdominal surgery due to a suspected abscess from an inflamed appendix. Afterwards they kept me several days in intensive care for monitoring. Thankfully my recovery went well and I was able to leave the hospital after I had been there over a week and continue my recovery at home.

As you can imagine it was a scary time! My mother and brother in law came over to look after Mini when my husband and I went to the hospital. I couldn't help feeling a little sad for a moment that our first "date" since she was born was to the emergency ward! I was seen by several doctors and given ultrasounds and even a CAT scan. The whole thing took ages. We ended up being apart from Mini for over six hours which I found really hard.

After all the tests I thought I would be allowed to finally go home and return the next day but I was advised to stay since there was the risk my condition might worsen overnight. At that stage I didn't know what to do! I explained that my baby is only 7 months and exclusively breastfed. We had never slept apart. One of the doctors very kindly was able to organize a private room for me to stay in and said I could get cot so my daughter could stay with me which was a big relief! 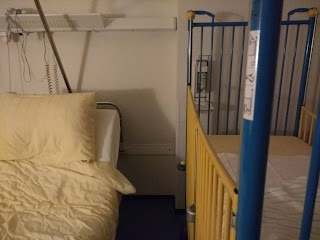 Mini ended up staying with me at the hospital for two nights which was lovely. Part of the night she slept in the cot which I had put beside my bed and the early morning hours when I was too anxious to sleep anyway she lay cuddled beside me. However before the surgery and the subsequent nights she stayed at home with my husband. My mother in law was with with them to help out. I remember being really worried about how Mini would get on without me but she managed well. My husband was able to rock her back to sleep whenever she woke up. In the hospital I was given access to a breast pump and I made sure I was only given medications that would be ok for the milk. My husband visited me each day with Mini and I would feed and cuddle her and give him some expressed milk to bring home. Seeing them was the highlight of my day!

Emotionally and physically it was a hard time, I'm not going to lie. When I found out I would need the surgery (this is the third I've had in my life), I was strong at first but after the doctor left and a nurse brought me the surgical gown, I just lost it and burst into tears... I didn't feel brave at all in that moment. The thing was though, I knew that I had no choice and I would just have to face it. Later that evening I felt like I had reached a phase of acceptance. I was still really anxious beforehand but I got through it and the surgery was deemed a success thankfully!

Having to deal with everything in my non native language also made things more difficult. My German is very good but not my medical German and there were times when I just couldn't follow everything the doctors were saying! I also felt homesick for my family in Ireland. The first few days of the recovery in the ICU were hard going but I tried to focus on my progress. By the fourth day I was able to shower and wash my hair which felt so great and I celebrated the little victories! Initially I had zero appetite and I had also lost loads of weight. Luckily over time my appetite came back and I was able to start eating and getting stronger. My family and friends were sending me messages on whatsapp and it also really helped getting their support. Each day I focussed on getting better and I particularly wanted to get well as quickly as possible so I could get home to Mini again.

This whole incident has reminded my husband and I what a little miracle she is. I'm so grateful I didn't need to have the surgery while I was pregnant with her as that would have been even scarier and would have put her at risk! I am making a good recovery now, feeling stronger each day and these are all things to be grateful for.
Posted by dubliner in Deutschland at 10:27 AM 12 comments: