Life during a pandemic

It's been almost three months since my last Coronavirus post which goes to show you just rare it is to have a moment to blog these days! During this time I feel like I have experienced the full range of emotions but these are some that stick out...

Initially hubby and I both felt very anxious about the situation - how could you not? We worried about our loved ones getting sick and were upset hearing about all the people worldwide who had lost someone- or even several people to the disease. Being an expat living in Germany I now feel even more isolated. Before the pandemic, Ireland was still "only" a plane ride away if need be, whereas now I have no idea when I will be able to see my family again. I would love if it could be this year at some stage but I am struggling with the decision because I don't want to put myself or others at risk of infection if I were to fly over there.

In the early days of the lockdown, I had a recurring fear about my husband and I both getting sick and having to go to hospital and I worried about what would happen to our daughter in that case. There was also a time when my Dad had potential exposure to Covid-19 and I was convinced that he had it and I felt really worried until he was in the clear. I had heard horrific stories about people dying alone in hospital devoid of any visitors. Thankfully, my loved ones haven't been affected by Covid-19 and Ireland and Germany are managing to flatten the curve. This has helped with my anxiety over time.

The first month or two was extremely stressful as we were adjusting to life during the lockdown. For me the hardest aspect has been trying to keep up with my job without having any childcare. Initially husband and I were both working from home and we were able to take turns minding our daughter while the other one worked, even if it meant working in the evenings or at the weekend. I found it really difficult at times to focus on my assignments with all the distractions and my productivity was suffering though.

Later on my husband was required to be physically present at work, initially only on certain days but then later full time making things more challenging for me. So my days would generally be spent working and only taking breaks to help mind my daughter or do housework. Barely any time to ever unwind for a moments. Hubby and I had a lot of arguments as is probably to be expected when you have two people who are extra stressed! I remember hearing that in China once lockdown was lifted there was a spike in people considering divorce and I could understand why! We mainly argued over things such as the division of labour and what we could or couldn't do due to Coronavirus. Anyway, thankfully hubby and I are communicating and getting on MUCH better lately. 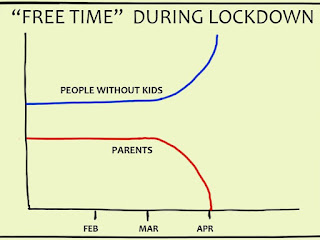 This graphic is just tongue-in-cheek by the way, I realize there are many people who have less free time during Coronavirus times, not just parents- for instance health care and other essential workers. It's just when I see so many suggestions on social media about how to use all "the extra free time" on projects such as de-cluttering your house or learning foreign languages, I can't help thinking how different that is from my house at the moment. I don't mean it as a complaint, having my daughter at home more is wonderful, it is just also difficult at times when I don't have any opportunities to do things for myself such as exercising. I have decided that I'm not going to feel guilty about the extra screen time my daughter is being exposed to, because sometimes it's the only way I can find a moment to prepare food for us or just sit on the couch and switch off after a long day. I will say, that Mini and I both love the movie Frozen two and Netflix's Boss Baby tv series!

There have been times where I've felt lonely and isolated. During the first six weeks, the only people I saw were my husband, daughter and strangers out walking. Thankfully there were some Zoom calls organized with friends which did help but I barely had time to attend them since I was already so busy juggling everything. And then, once people were allowed to meet up outside at a social distance, we still couldn't do that much - we don't have a car and were too nervous to use car sharing, travelling using public transport was advised against and I was having some issues with my bike so I still wasn't able to see most of my friends. Even if it were possible to get together, I found that many people were still too nervous to meet even once it was permitted. That's still how it is actually. I did manage to meet a few friends individually over the past few weeks thankfully but it was been lonely and isolating at times. My daughter is great but you miss adult conversation..

It hasn't all been bad though. Since I haven't had to be anywhere by certain times, we have been able to move at a slower pace. I don't have that crazy rush in the mornings trying to get myself and Mini ready to leave the house early to bring her to daycare and go to the office. I realize now that I used to over plan my life a lot in order to maximize my time but that didn't leave Mini with enough moments to just have "free play". For instance I had signed her up for a gymnastics class but I think that she's too young to get much out of it and she's actually much happier with simple things such as going for a walk or playing with mud in the garden! We also feel very grateful to have each other and that none of our loved ones have gotten sick.

Since we were trying to avoid going to the supermarket as much as possible we would try to only shop once and get enough to last us for 2-3 weeks. This meant having to meal plan and use up items in our cupboards. We have been cooking much more often which has been a nice side effect. My husband even started baking bread.

Initially the playgrounds were closed in Germany. Devoid of play groups or other structured activities, I had to come up with lots of crafts and imaginative play we could do at home. It has been fun teaching Mini to paint and baking with her.

I guess this is similar to the appreciation post. Being able to spend this extra time with Mini has been something that I will always treasure. Her general development has come on in leaps and bounds and I do think the extra individual attention has helped her. Her English language skills have now overtaken her German which has been nice for me to see.

It has been such a strange time in general. At this stage, several months in, many people are getting frustrated with the restrictions. I can completely understand that and of course it is a very difficult situation. However, I also know for the sake of those in the high risk groups who are in danger of becoming seriously ill if they catch the virus, it is a bad idea to let ourselves become too complacent at this stage. 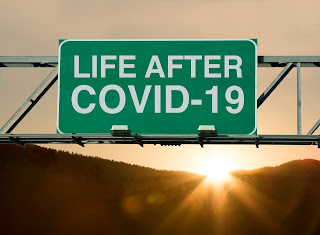 One positive aspect I notice is that without the distractions of a busy social schedule, I get the impression people have been being given an opportunity to examine everything around them and think about what new world we want to build after all this is over. Instead of just "going back to normal", let's create a better society for everyone! The coronavirus has been a tradegy for humans, no doubt about that, but there have been many positive effects on the environment which I hope could lead to real action against Climate Change for one. I also fully support the peaceful protests for racial equality and against police brutality that have been happening around the world and hope we will continue to fight against injustice until all lives are valued.
Posted by dublinerinDeutschland at 9:55 AM 6 comments: