Colourful eggs hanging from the trees, it must be Easter! 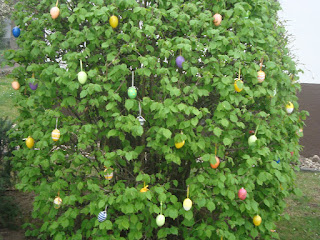 Germans get really into celebrating Easter. They buy all these colourful painted eggs and hang them up in their garden. They also buy bunny pictures and statues and put them up around the house. And everywhere you go, people are wishing you a "Frohes Ostern" -happy Easter. It is normally a time for families to get together and enjoy a big meal, typically lamb. And they even buy each other presents. It is a little like a lower key Christmas! 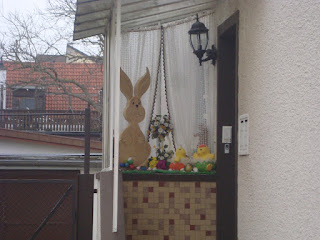 Disappointingly though in my eyes anyway, they don't have Easter eggs! I'm talking about the big Cadbury's chocolate ones. What they have instead are chocolate covered rabbits. They also have some little chocolate eggs with cream inside, a little bit like Cadbury's cream eggs, though not as tasty! 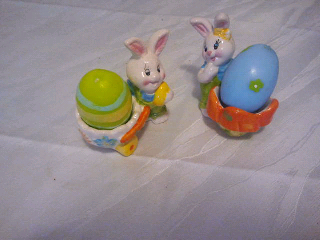 I am delighted that Spring is here. It's a time for new beginnings and without going into too much detail, my job situation has recently improved a lot. I am still working in IT but I have had a career change in the industry into web development, which I am loving. Career wise, I also realise that I am enjoying more opportunities than I would be if I was still living in Dublin, where unfortunately the job situation is still pretty bad, from what I hear. It is times like this that I am glad to have emigrated to Germany.
Posted by dubliner in Deutschland at 11:22 AM No comments:

My final two wisdom teeth were removed last week. It actually turned out to be THREE teeth! I'll start at the beginning...

If you read about my experience the last time you will remember that it all went well expect that a nerve ending was damaged/broken during the surgery. It ended up taking nearly two months for new nerve endings to grow and for me to regain full feeling on the left side of my chin and mouth.

When I phoned up the dental surgery this time around, I said in German that I would like to make an appointment. The receptionist replied "ah hallo Frau X!" (where "X" is my actual surname). I must be the only native English speaker with a bad German accent going to my dentist! I went ahead and made the appointment to have my last two wisdom teeth removed. As the date approached I was a little apprehensive but far less nervous than the first time around as I knew what to expect and also I knew that it wouldn't be that bad. Uncomfortable and unpleasant but over in under ten minutes. Unfortunately I was wrong! 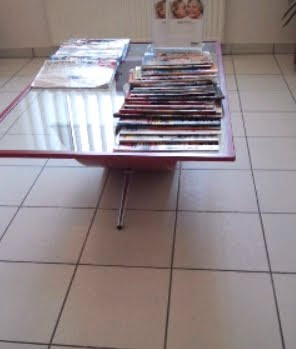 I arrived at the dentist and as usual there was a lot of waiting around- he is a busy man! A half hour wait before I got the injections. This time he gave me about five injections- I don't think he wanted to leave anything to chance (last time the injections were not fully effective). But I was left to wait over an hour as he told me he wanted to get through the other patients first and not just do my surgery "zwischendurch" (in between). That was fine with me, I didn't want my surgery to be rushed while his mind was elsewhere, though it was also no fun waiting. Even though I had gotten wisdom teeth removed before, and logically I knew it should not be that bad I was starting to get more and more nervous.

Finally at about 12.45 he was ready (my actual appointment was for 11am.) First a trainee younger dentist comes in and introduces himself and I started worrying that maybe he would be doing the surgery despite being unexperienced. But no, he ended up just observing. There was also a dental nurse with one of those sucky gadgets to suck up the blood and saliva. This time round, the wisdom teeth removal was A LOT worse! My bottom tooth must have been in very deep because the dentist was roughly pulling it for ages and ages before he could get it out. Very unpleasant! This time I also felt pain occasionally.

One of the teeth, the top one, was under the skin and had to be cut out, and then I could hear the dentist, and the trainee and the nurse saying something about "ein dritter Zahn" (a third tooth!). I was wondering if they meant one of my existing teeth was too close or what. I also understood them saying that this third tooth would also have to go. The dentist then said "blasen" to me and squeezed my nose shut with his fingers. I was not sure what that word meant and I thought at first he was telling me to stop breathing through my nose during the surgery. Oh man, it was already unpleasant enough as it was! But then I realised he meant to blow out my nose. So I did and then the three of them- the dentist, trainee and nurse starting talking about this so called "Blasen test". The nurse said she had learned about it in university. This had not happened during the removal of my first two teeth and I had no idea what was going on.

I also felt something fall on my lap at one stage and the three of them laughed and said they would get it after. After all the teeth were eventually removed the final stage was the stitches. This also seemed to take much longer than the first time around. By that stage I think I was chanting in my head "please God, can it be over soon!".

Anyway, finally it was all over and the dentist said well done. He then told me that I had had a third tooth which was also taken out. "Es kommt ganz selten vor. Wahnsinn!" It is very unusual. Crazy! he said.

He also told me that I was not allowed blow my nose for a week. I think my facial reaction was like "huh?". He then told me that during the "Blasen Test" when I had blown through my nose, air had come out of the tooth (the third tooth I think). So presumably a vigorous nose blow could dislodge the stitches. When I stood up I noticed that one of my teeth had fallen on my lap. The dentist asked if he could keep my three teeth. He probably wants to take photos for the dentist journal about the woman with the extra tooth. When I looked at my watch after it was all over it was 1.20pm. So the surgery had taken about half an hour. I was very glad it was behind me!

My face has been extremely swollen, and I look like a chipmunk, but otherwise I am recovering well! I went back for a check-up at the dentist on Friday and he told everyone that I am "eine tolle Frau" (a terrific woman). 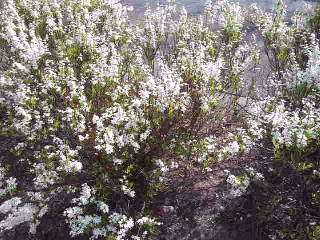 Posted by dubliner in Deutschland at 4:02 AM 8 comments: