It's goes to show how busy life has been that I'm two months late writing this! Here's a link back to Mini's one year update . Year one to two was really all about her becoming her own person and her personality shining through.

Over the last few months Mini's talking and development has come a long way. Now she usually repeats new words after we say them to her and she has a great memory. There are still quite a few words and sounds that she can't pronounce properly but we have learnt from context what she is trying to say. We are able to have little conversations now which is fun! For instance, sometimes if a toy is broken, she might say "Dada fix it!". When doorbell rings she'll say "doorbell - delivery man". We've been getting a lot of stuff delivered since the Coronavirus isolation started haha. Then if I ask what's in the box, she might answer "food". 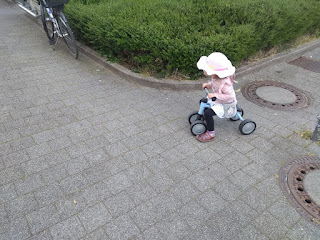 She definitely knows her own mind and can be very determined. She has strong opinions about what she wants to wear some days. I usually let her wear what she wants, within reason. Like if she insists on wearing a "party dress" but it's a cold day, then I'll just make sure to put on a long sleeved top underneath and leggings/tights. She has one doll who's her favourite and she brings her everywhere. She calls her "Dee-doll". It's very sweet.

She loves music and sings along to nursery rhymes now. She enjoys imaginary play do we'll play games such as doctor where we pretend her toys are sick or we have teddy bear picnics. Reading is also still a favourite activity and she will patiently listen to the story now instead of always turning the pages herself.

She is currently transitioning from one nap to no naps but it seems to be a very long process! Some days she flat out refuses to nap so then we bring her to bed early. The danger is when she doesn't nap but then falls asleep too early. There was one day she was out for the count at 5.15pm already so I brought her to bed then. However she ended up waking up for the day at 3.15am which wasn't so great as you can imagine! So now we try to keep her awake till 7pm on those days she skips the nap. When she does nap, sometimes she can sleep for up to three hours which is quite handy when I'm working from home. On those days she then stays up late and doesn't go to sleep for the night till around 10pm.

I was worried about how the current situation would affect her but she has taken it in her stride. I think she's enjoying not going to daycare and having more attention from us. She sometimes asks about the "Kita" (German daycare) and I just say that it's closed and on holidays for a few weeks and she accepts that. When the weather is nice we try to spend some time in the garden or go for a walk around the block.

During one of our walks recently she saw two little girls from our neighbourhood playing and she ran over to them before I could stop her, longing to join in. One of the girls then shouted "Abstand halten!" (keep back) to her. Of course the other girl was right, we are meant to keep kids apart but I couldn't help feeling a bit sad for Mini who is too young to understand. 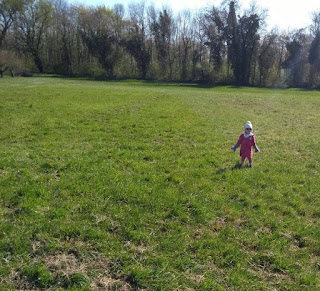 Lately it can be real struggle for my husband and I trying to juggle home office and looking after Mini and the household. She's ending up having more screentime than we would like and our house could badly do with a good clean. However we are making the most of it as best we can. She's such a fun and sweet person and I feel so grateful having her in our lives.
Posted by dubliner in Deutschland at 2:55 AM 9 comments: