Hey You! The tricky subject of the German "you"


Something that causes a lot of confusion for English speakers here is figuring out which form of "you" to use. The formal "Sie" or more casual "du". The rules go something like this...

If the other person is around your age or younger or a good friend then you can probably use "du" when referring to them. If the person is older, someone you don't know or someone deserving of respect then you should use the formal "Sie", unless they tell you it's ok to use "du".

And when you use "Sie" it also means you would refer to the person using their surname. Germans use their surnames a LOT. When I go to my hairdresser they always say "Guten Tag Frau X". Hello Mrs. X. It makes me feel a little old!

Normally if you meet someone and as you become friends they would probably ask "Können wir uns duzen?" Shall we refer to each other using the informal "you"?

At work, a lot of companies have a general "du" policy where employees refer to each other with the "Du" form. The boss may still be "Sie" though and any clients would naturally be the more polite and respectful "Sie". It's also considered an insult if you had been on "Du" terms with somebody and then you start referinig to them with "Sie".

I was also recently told by someone that you would use "Sie" during self-defence, which surprised me. I thought that if someone was hassling you then you would not feel like using the respectul "Sie" term but my German friend pointed out that anyone listening to the conversation would more likely come to your aid if you used "Sie" as then it would be clear that the person is a stranger to you. So you would say something like "Hauen Sie ab!" Get lost! or "Lassen Sie mich in Ruhe!" "Leave me alone!". Just something worth bearing in mind if you ever find yourself in that situation!

Some more tips and rules are outlined here.
Even Germans can get confused sometimes about which they should be using! So I wonder what hopes us non-native German speakers have of getting it right!

Posted by dublinerinDeutschland at 2:22 PM 3 comments:

We're just back from our latest trip to Ireland. This time we went for just over a week and it was perfect as it meant I had time to properly catch up with everyone but it also allowed for plenty of family and chill out time! The weather also played along and we only had one rainy day! 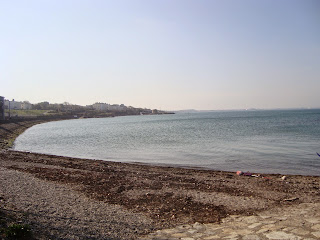 Easter is a great time to visit Dublin I find and because of the public holidays I didn't need to take that much from my annual leave. The weather is also nice this time of year and tourist attractions aren't as crazy busy as they might be during the Summer months. 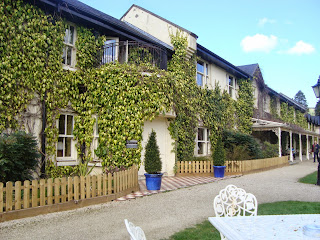 I was chatting to a Spanish girl recently who lives in Dublin and she was saying that people working abroad should be allocated extra days off to cover trips back to their home countries. It can be tricky when you live abroad as you don't want to spend all your annual leave visiting your home country as you might also like to go for a proper holiday. So I liked her suggestion!

Though in fairness the amount of annual leave is really great in Germany; you get nearly six weeks off in the year and there are lots of public holidays! The only problem is that the public holidays aren't very spread out and if they happen to fall on a weekend then you just lose them. 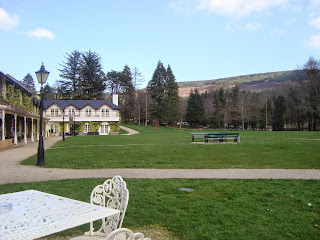 The GerMann had been complaining recently that we never get to do that much sightseeing during our trips to Ireland, so this time we left Dublin and spent three days in a hotel in Wicklow, south of Dublin, commonly known as the garden of Ireland. We stayed in a place called Brooklodge and it was fantastic, with a lovely spa where we spent two mornings and I got a very relaxing full body massage. 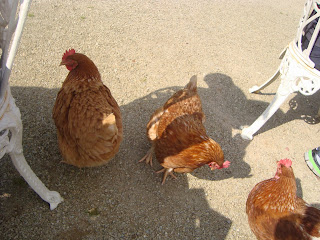 The breakfast there was delicious (organic porridge with honey, full Irish breakfast, scrambled eggs and salmon) and the restaurant food, though pricey, was also great. They primarily serve healthy organic food and even have their chickens freely walking around the place!

We visited Parnell house and gardens, where one of the leading Irish political leaders lived, one one afternoon and enjoyed some lovely walks there and later on went to a 7-foot high maze which was also fun. 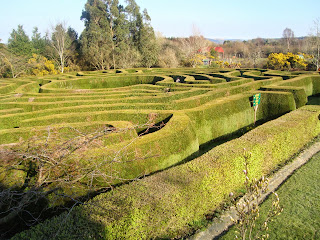 We went for lunch in Dun Laoghaire and then walked along the coast, which was just beautiful. And of course we found the time to indulge in afternoon tea! And apart from that we dined in lots of good restaurants and ate yummy chocolate eggs (including a huge Guiness flavoured chocolate easter egg!). On Easter Sunday itself we went to mass and chatted to the priest who married us and jokingly asked if we are "still married?" which gave us all a chuckle.

We are hoping to plan another trip back to Ireland in August so looking forward to that! 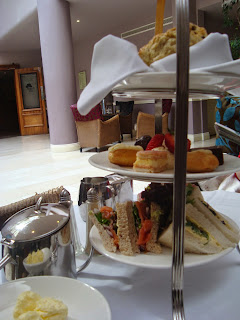 Posted by dublinerinDeutschland at 2:11 PM 5 comments: