The first few days after Mini was born I barely slept. It wasn't that she wasn't sleeping, I just had too much adrenaline from the birth and could not switch off! Also I kept checking on her while she slept to make sure she was ok. The next month or so after we got home from the hospital, I was so tired I would literally just pass out from exhaustion once we finally got Mini to sleep at night. There were a few times I fell asleep accidentally which is something that could potentially be dangerous. Never on the couch though. Once in the early morning for instance I had Mini lying on my chest as she slept better that way but in those days I was paranoid about bedsharing so I was just planning to let her sleep and rest myself. Next thing I woke up and realised I had been dreaming. But neither Mini or I had moved and she was perfectly fine.

Sometimes I would pass out at night only to wake a few hours later with a start to hear Mini crying in her cot beside me. It used to take me a second or two to remember I was and what I needed to do! A few times over the first few weeks my husband and I had awful nightmares about something happening to Mini which was scary. I think we were just so paranoid about SIDS. My sleeping gradually because lighter. Especially as we stopped needing to supplement with formula and I exclusively breastfed. I found myself waking up and I would look over at Mini and she would be awake but not crying and I would wonder what woke me. She must have made some tiny noise which I picked up on as we were so in tune with each other.

I was probably overly responsive at this stage. Instead of giving her a moment to see if she might resettle herself, I would think, "oh it's been several hours, she's probably hungry" and then feed her! Anyway her sleep naturally improved gradually until 3.5 months when the four month sleep regression started early. This is totally normal if you look at graphs of infant sleep but it was hard to deal with initially when I could no longer encourage her to sleep any of the night in her cosleeper cot. This is around the time I read up on safe cosleeping and started bedsharing. It helped so much and once I got the hang of the safe positions. We both got better sleep despite the numerous wake ups and I felt more rested!

I'm not sure what happened around 6 months though. Mini's nights were mixed at that stage. Some good some bad. Typically around 3-4 wakeups or more. Suddenly I found myself dealing with insomnia. It was like I had forgotten how to sleep! I would often think to myself, well is there any point falling asleep now since she will probably wake up in an hour anyway, which wasn't very condusive. Some nights I fell asleep alright but then after the first wake up I wasn't able to go back asleep. I remember one night lying awake for several hours while Mini slept peacefully beside me. So frustrating! Apparently this insomnia is very comment for parents, particularly mothers that it even has a name, Momsomnia. It can happen once your baby is finally sleeping through the night that you have forgotten how to sleep yourself. Or like me that you have become such a light sleeper and are so used to waking constantly that it is hard to stay asleep. 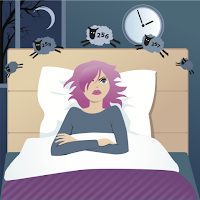 Some things helped luckily. I downloaded a blue light filter for my phone and use that in the evenings. Also I stopped keeping track of Mini's wake ups and would put my phone somewhere else overnight. I also removed any white light from the bedroom and now we use a red night light. Before going to bed my husband usually minds Mini to give me a chance to wind down a little as I find when I am on the go non stop all day and then suddenly it's bedtime, I just can't switch off that easily! Sometimes I even write down all my anxieties and thoughts on a pace of paper to deal with another time, which help clear my mind. Or having a relaxing shower helps too.

Unfortunately I still get the insomnia occasionally. Mini's sleep recently got worse during the eight month sleep regression. I am certainly looking forward to the time when she sleeps longer and better at night. That said, I love our nightly snuggles and know I'll miss them once she does sleep through (eventually!).

Posted by dublinerinDeutschland at 10:00 AM 7 comments: