He liked it so he put a ring on it

It's about time I shared my good news on the blog. We are engaged! At the end of the summer, in early September we went on a last minute trip to Mallorca- also known as the 17th German state- based on the number of Germans who live and visit there. We stayed near Cala Millor on the north east of the island- not party central but lively enough, and we loved it. The beaches are stunning- albeit a little crowded at times. You can have a lovely holiday without breaking the bank. We also rented bikes one day and found a little cove with beautiful clear sparkling water and away from the other tourists. 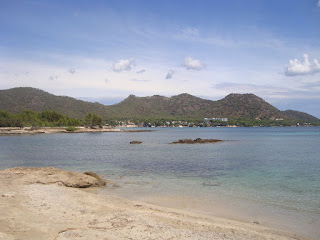 On our last night we went out for a nice meal and after some Sangria the GerMann suggested a stroll on the beach. Halfway down the beach he proposed. I'll keep full details of the proposal private but it was perfect! Who says German men can't be romantic?! I burst into tears when I realized what was happening but managed to get out a "yes"! I was on a complete high after the engagement which lasted about a week until I started thinking about the enormous task ahead of me of organizing a wedding. We (though mainly I) have decided to have the wedding in Ireland. I figure I have moved to Germany and will be here long enough, I can at least have my wedding back in Ireland!

I have also been blown away from the response to our engagement. When I put the announcement up on facebook (easist way to share the news!) I got about 50 comments and "likes"! We have also received lots of engagement cards and even presents which we weren't expecting at all. And everyone is really excited for us.

So the last two months I have been really busy with all the wedding planning. I know everyone says this but I had no idea how much is involved in organizing a wedding! It is also harder when you don't live in the country. I've been back in Dublin twice already since getting engaged- checking out venues and bridal shops! Initially when we discussed our ideas for the wedding, we both agreed it should be small and intimate. Though our ideas of "small" are completely different. Mine- about 80 guests, him about 10! I negotiated up to about 50 guests but when I started working on the guest list I realized it would not be enough and people would end up feeling upset at not being invited. But also you only get married once and I would like the people in our lives to be there to share the moment with us. So now we are at 80 guests which we are both happy with.

I believe there are some women who have their whole wedding mapped out and when they get engaged they know exactly where to start. But I was never like that. I had vague visions of being in a lovely dress and walking down the aisle in a church, but in terms of what style dress or colour schemes or even what sort of venue I would like, I had never given these things much thought.

Looking at the wedding planning checklists online can be overwhelming!! But better to take each step at a time. My first point of call was to try to book the church. I was surprised how many dates were already booked up in the church for next year. The initial date we wanted had an 11am time slot which I feel would have been too early, or a Friday, which I also would prefer not to have as I know it is more awkward for guests. But we booked a time slot two weeks later, on a Saturday at 2pm in August. Perfect.

My next step was looking up venues. I began searching through all the possible venues within an 1hour or so drive from Dublin. Initially I was spending ages thinking about which place would be best, and the GerMann also looked up some info on the venues. But then just as I had picked the ideal venue and was day dreaming about it, I sent them a quick email to check availability, only to find them booked already! So then I tried another place nearby- also booked!

At this stage I started panicking that all the best places would be gone already. So then I emailed about 20 different places checking availability to get the list to work from. We ended up having to rule out loads of places due to them being booked, or having minimum numbers on a Saturday (like 150!). Then we were down to about 10. Of that list we further narrowed it down to 7 which I visited in Ireland all in one day with my Dad!! Yes, it was a tiring day!!

After that we narrowed it down to two and the venue is now booked. So I do feel like things are slowly but surely moving forward!!

The next thing is hopefully to settle on the dress. I have been bridal shopping in both Germany and Ireland. The advantage of getting the dress here is that it is easier to go to the dress fittings, but it would be a pain trying to get the dress and everything to Ireland. Here's a photo from a bridal fashion show I went to here. 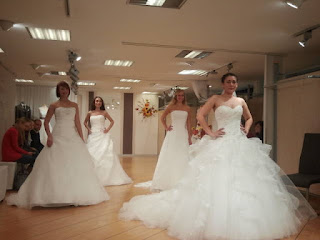 I think that there is universal wedding dress fashion in that when I compare German magazines to Irish or American wedding magazines or websites I don't see a big difference in the styles. However, after going to a few German bridal shops here, I have noticed there tend to be a lot more of the traditional big puffy dress styles. With lots of ruffles or flowers. Like the dress on the far right in the picture. Not quite what I'm looking for! Hopefully I'll find the perfect dress soon.

Any wedding planning tips from anyone out there?
Posted by dubliner in Deutschland at 9:53 AM 2 comments: