What sort of expat are you?

There are also many reasons for becoming an expat- moving countries for a job, sense of adventure, moving for love. Some expats come and go - they live in Germany for a few months or maybe years but ultimately return to their home country- their Heimat. There are fewer of us however, who are probably going to be here for the long haul.

There have definitely been times when as an expat, you can feel like a fish out of water. Like you don't belong. I could relate to this post by fellow blogger about the isolation you can feel living in a new country:expat isolation and loneliness

Travelling home, I've had moments where I just felt such relief once I got to the airport and heard other people with Irish accents around me and just to be able to understand everything! And once home, it's so nice to be able to talk to someone in a shop or a restaurant and be understood, and every little thing, doesn't feel like an ordeal! That was was how I felt at first. My German has improved a LOT now, so that most times out and about in cafes, restaurants, trams etc I am understood.

How will living in Germany change me? Sometimes I feel like I am more shy here and not myself. That's mainly due to the language. But this is getting better. I have heard lots of people say it took them 3 years of living in Germany before they were really fluent. Maybe I will become more "European" like one of my aunts said. What would that entail exactly? One positive aspect of being an expat makes you more independent as a person- you realise you can cope in a lot of situations you didn't think you could!

I mentioned earlier that I have to carve out a life for myself over here. When I first moved over and started living with my GerMann, I was very dependent on him. I didn't have much of my own life here at the start at all. That was tough at times. Once I got a job here that helped a lot. And then the more I gradually made friends and developed a routine the better things got. It's not too hard to make acquaintances but it takes time to make really good friends. Ones who you can talk about everything with and depend on. I have reached the stage now that I have some great friends here, but for a few months at the start it was tough. Apart from my boyfriend I didn't really have anyone to talk to- past the chit-chat/small talk level.

I have heard from some long standing expats that you feel gradually more distanced from you "home" country as the years pass. So that you don't feel "at home" in either country. Another (and much nicer) way of looking at it though, is that you have two homes. Germany is gradually feeling more and more like home to me.

My wish for the future would be to adapt to German life, while still remaining me. I would love to reach a level of complete fluency in German - spoken and written - where I can handle any situation, but also not lose my Irish accent (when speaking English)! The GerMann and I have discussed it and it probably makes most sense for us to stay in Germany. So I shall continue with my ex-pat adventures!
Posted by dubliner in Deutschland at 10:22 AM 5 comments:

Yesterday we were at a wedding and today I am feeling exhausted and just a little hungover. The apartment is looking very untidy and cluttered and there is a big pile of laundry and dirty dishes in the sink. Sunday is normally my day for catching up on housework. During the week after coming home from work, housework is the last thing I feel like doing, so I tend to leave most of it till the weekend. On days like today though, I'm not feeling very motivated! What I'd rather do.. sit down with a nice cup of Barry's tea (I bring it over from Ireland) and watch the latest X-factor episode! I'm following the UK X-factor this year. Nice to keep some habits even though I live in Germany now! I tried watching a bit of the German Xfactor and I just couldn't get into it.

The tea in Germany is awful! If ask for tea in a cafe, nine times out of ten they bring you a glass of lukewarm- not hot- water and a tea bag beside it, and no milk. You put the tea bag in, and the tea barely even changes colour. And then you ask the waitress for milk and maybe after asking them several times, they might remember (customer service is also lacking) and bring you hot frothy milk like the kind you would put in a cappuccino, or else they bring one little container with about 2 drops of milk- like the kind they give you on airplanes. But at home, I can make my tea just how I like it!

Typically how tea is served in Germany: 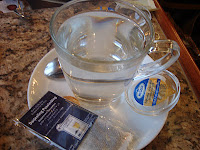 You try to squeeze the tea bag as much as possible: 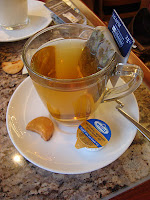 Then you add some milk. And it tastes like milky water with a hint of tea: 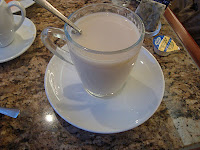 This is how it should be!! Proper irish tea you get served back home: 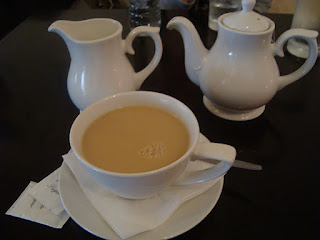 I think I will do some quick 'maintenance' housework now- a quick hoover, clean the dishes in the sink, tidy the mess from one pile to another, and do a bigger tidier another day. Both me and the fella have similar housework styles- don't do any for a few days, and then do a housework blitz and spend a few hours- this often coincides when we are about to have visitors! During the week, my GerMann often cooks since he gets home from work earlier but then I try to cook weekends. Sometimes I feel inspired on a Sunday and cook something adventurous, like a lasagne, or my speciality chicken and broccoli bake, or maybe I bake some buns or scones. I don't think today will be one of those motivated days!

Yes as you have probably noticed domestic tasks are not my speciality! You could say I'm tired after working a 40hour week or you could say I have a lazy streak. Yesterday was a long day at the wedding though (up at 8.30am) and a late night (didn't get home till after 2am) with too much wine, so I think I have earned an easy day today. Next week I'll catch up on the housework I think! Oh how I wish we had a house-cleaner sometimes! It would seem indulgent though since there are only two of us in a relatively small apartment.

I am really enjoying this year's Xfactor with the new judges. Kelly has a real likeability factor. I find the show tends to make winter more bearable when the days get short and dark too. I used to watch it together with my sister back home, but we can watch it separately now and then discuss it on skype and it's nearly the same!

On Sundays my GerMann is always very busy preparing classes for school the next week. It's a hard life being a teacher! I don't envy him! Sundays are therefore my time to meet friends for coffee, skype friends or family back home, study German, mess around on the internet, catch up on housework or just relax and watch my shows.
Posted by dubliner in Deutschland at 8:58 AM 2 comments:

Recently I have become addicted to reading blogs from other expats living in Germany. They have inspired me to start blogging myself again, this time more regularly. Why did I stop before?

Firstly, blogging can be very time-consuming and I was just busy doing other things. Settling in to my new life in Germany. But secondly I was concerned about privacy issues... How much of my private thoughts and photographs did I want floating around on the world wide web?! My boyfriend also pointed out that I need to be very careful what I say about my job - his view is I shouldn't mention my job at all. I can understand that... But it left me thinking, well what CAN I write about? And what sort of pictures CAN I put up? And in the end I just thought it was easier not to blog at all.

And thirdly I wasn't sure what my blogging voice should be and I thought that writing about day to day life could be a bit boring for readers. But after reading other expat blogs I was reminded how interesting the expat life is and there is actually a lot to write about. And us expats need to help each other out. If we learn something the hard way, why not write about it to stop someone else making the same mistake?

Anyway so I'm restarting my blog!

I've been living in Germany just over one year now. And I feel settled and happy here now. I still have moments of homesicknesses but they are getting less frequent. 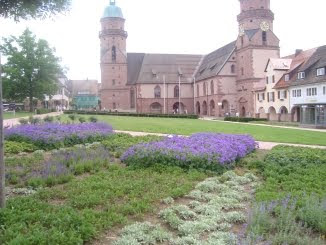 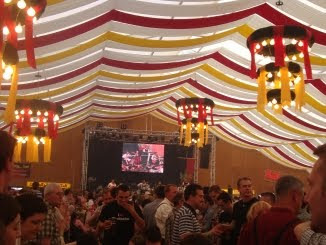 And I love the lakes. It was nice to have a proper Summer this year. Germany is a great place for cycling and I enjoy cycling trips here and the outdoorsey lifestyle. I love that I have met loads of new interesting people this year, and I feel proud of myself for surviving with a foreign language and doing so well. 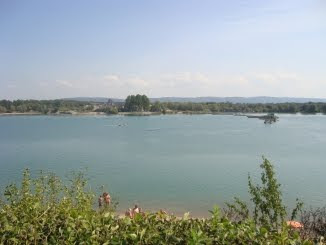 I only ended up being unemployed for a month before I found a great IT job not too far from where we live. So now my commute is a dream! It only takes less than a half hour to get to work and when the weather is nice I cycle. I'm also really enjoying my new job! The work is interesting and my colleagues are very friendly.
Posted by dubliner in Deutschland at 5:46 AM 3 comments: