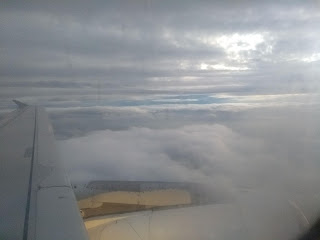 Flying with a baby went much better than last time. We choose an earlier flight and made sure she got her naps. On the plane before take off she started getting cranky and hubby and I were worried about how the flight would go but I managed to get her to sleep soon after. She breastfed a little but then stopped and then I cuddled and stroked her head until she nodded off. She then slept through the entire flight to Ireland which was perfect!

She still wasn't a big fan of car journies unfortunately so those were difficult but it wasn't as bad as last time. I ended up often having to let her watch youtube videos on my phone so she wouldn't get upset (Wheels on the Bus / Five Little Ducks / Old Mac Donald). We tried to make sure she got one or two naps each day depending on what was on the agenda and she was generally good humoured. Occasionally she got a bit overstimulated by the end of the day and she was also teething pretty bad so a few evenings she was a bit grumpy and took longer to go to sleep!

Mini is 10 months now and still too young to really appreciate or understand Christmas. We took her to meet Santa at my local shopping centre and she cried when I put her on his lap. Oh dear! However, she loved seeing the Christmas trees everywhere ( I would hold her up to one so she could feel the tinsel and lights) and going new places. 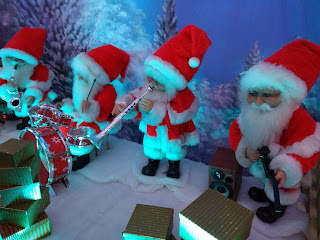 I just loved everyone getting to spend time with her again. She is such a fun little person already. She can say "mama" and "dada", wave and clap. She also already understands a few phases I say a lot such as "let's look out the WINDOW" and "would you like some MILK?" and "open the door!"

For my birthday I got a spa voucher and enjoyed a massage, facial and manicure. It was so relaxing. I celebrated the day by going for afternoon tea with my family. It was the perfect low key birthday for how I was feeling but maybe next year I'll try to organize something bigger. Having a birthday around Christmas always makes it really difficult to plan something as it's such a busy time for everyone! 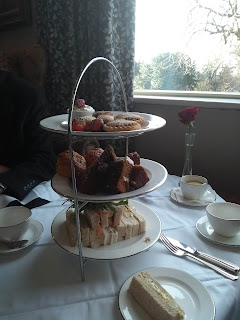 There were just two things that didn't go so well on the trip. Hubby and I had a fight on Christmas day. I think it was the stress getting to us both. I do some baby led weaning with Mini and she started gagging/chocking on some turkey and hubby freaked out and lost his temper at me. It was scary and upsetting but she's fine thankfully. She had fallen earlier that day and I'd gotten cross at him for not watching her which had bothered him. We have both made new year resolutions to be kinder to one another and more of a parenting team again.

The other thing that bugged me was all the unwanted advice about our parenting we kept getting! People compliment Mini for being a very happy baby but then constantly tell us things like "you'll need to get her used to sleeping in her cot" when they hear we bedshare and that it's a "bad habit" that we usually lie next to her for naps. It made me feel defensive and frustrated as we are doing our best. Mini is a contact loving baby and my husband and I are fine with the situation - it works for our family- so why does it bother other people so much?

It was fun for me to spend time with family and relations again on the trip and the friends who were able to meet me. Unfortunately since the holidays are such a busy time, there were several people I didn't get to see. We're planning another trip back to Dublin in the Summer though. I felt a bit homesick when we were leaving. It's a pity I live so far away but my life is very much in Germany now and I can't see us moving. It was a lovely Christmas and I'm looking forward to when we travel over again to Dublin in the Summer and Mini can experience even more of Ireland and its culture. 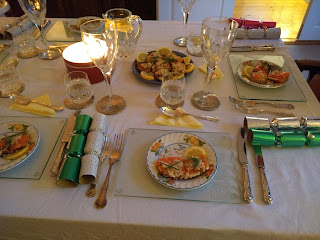 Posted by dublinerinDeutschland at 8:00 AM 4 comments: