I thought I'd share some updates on what I've been up to since March.

I knew I had to celebrate in some way even if only for a few hours! Some friends and I decided to go to one of the Irish pubs in town. Even though a few of them were going to bring their kids along I decided to leave Mini at home as I knew the pub would be crowded and sometimes she just gets overwhelmed in loud and busy places. My husband was happy to stay with her and I enjoyed getting to catch up with the girls over a Guinness or two. I actually rarely drink Guinness! I tend to prefer sweeter drinks like wine spritzer but it was Paddy's day after all so I ordered a pint with some cheese and onion crisps.

It was a fun afternoon. Everyone was in really good spirits. There were a mixture of all nationalities in the pub and I enjoyed mingling. For some reason this only seems to happen at Irish pubs in Germany I find. At the German pubs people tend to stay with the groups of friends they arrived with. Of course I had Mini dressed in a cute green outfit for the day. Hopefully next year she'll be old enough to enjoy the celebrations a bit more. 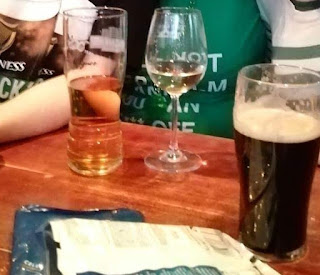 In March Mini started going to KITA (daycare /creche). In Germany they do a very gradual settling in process called "Eingewöhnung" which typically lasts 4 to 6 weeks. It started off well, the first week there we went for around an hour each day and I even left her a few times. She was happy to explore the new place new but soon it clicked that Mummy was leaving her there and then she started crying at drop off. The very worst day was when she was upset for almost half an hour after I left. It was very hard on both of us. I burst into tears myself and one of the minders gave me a really big hug!

I felt a lot of guilt around sending her there, wondering whether I was doing the right thing. I reminded myself that I knew she was in good hands. The childminders there are lovely and I knew they would be comforting her and distracting her. Thankfully that one day was the worst and it got better from then on. The following day she was upset for around ten minutes after I left and subsequent days only a few minutes max. On some days I handed her over to the minder and she got upset but then I would wait outside the door for a moment and I could hear she had already stopped crying. I was also able to peak into the window and see her playing which helped with the guilt. She is now settled and happy there which is a huge relief! I've been working more hours now and that's been going well too.

The weather has finally started improving here and we've been able to spend more time outdoors lately. The German winter lasted a long time this past year but now all of a sudden we've started getting warm Summer like days. Hubby and I got a yearly pass to the zoo and have already been there a few times. There are lots of playgrounds and a nice park area so it's a lovely place to walk around even if you don't go to look at the animals.

As Mini gets older she is able to partake more at playgrounds. I can put her into the baby swing or let her play in the sand with a bucket and spade for instance. Of course she still tries to put things like sand and stones in her mouth so I have to keep a close eye on her! One of my friends and I also went to the park for a picnic recently and Mini was happy to sit on the blanket and snack. The weather lately has been a bit like an Irish Summer actually which is pleasant. Once it gets to August/September here then you get this extreme heat which makes being outside during peak times less tolerable. 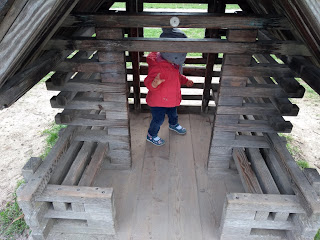 Like most people, we are following and enjoying the final season of Game of Thrones! It will be strange once it's all over. I'm currently reading "Big Little Lies" by Liane Moriarty and we've also been watching the TV series. I like the casting, the actors they've picked mainly match my idea of the characters. My book club met recently to discuss out last book which was "A Man Called Ove" by Fredrik Backman.

We've a few trips planned this Summer which I'm looking forward to. Anyway, enough about me. What's new with you?
Posted by dublinerinDeutschland at 8:20 AM 4 comments: