It was strange to think that, considering we have agreed this is our final try of IVF, then today was also the last time our embryos would be transferred into me. Everything went pretty smoothly. The doctor wouldn't tell us the rating of the embryos but commented that one of them had grown particularly fast and was the better of the two. 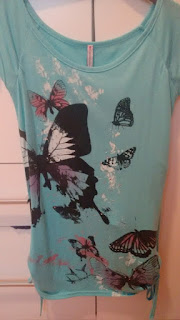 This morning I went to the hairdresser bright and early at 8am! I wanted to get my hair coloured and cut before the transfer. If all goes well, then I would try to avoid dying my hair for as long as possible and then ideally only with dyes containing less chemicals. It seems overwhelming thinking that in two weeks I'll know the outcome! By then I'll know if it's a total negative and our journey to try to have our child or children will be over and it will be time to look towards a different future.

After the transfer hubby and I had a silly argument. The details are a bit stupid but I ended up getting emotional. All the stress from the past two weeks was getting to me. I'm feeling much better now though. And reasonably positive. Once we got home we had a relaxing afternoon. I've taken several days off work post transfer this time and that will be nice to have some time to relax before going back to work.

This is the top I wore for the transfer. I love butterflies and something about them has always made me feel hopeful. As well as the spotty socks I had worn for my first IVF transfer, the only time I was properly pregnant, even though it was short lived! This evening we watched the latest Muppets film which was a bit of fun. 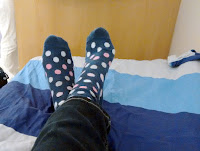 If I start thinking about things too much then it's a little overwhelming so I'm planning to keep up the philosophy I used at the beginning of this cycle and just take things one day at a time. I am also planning to try to hold off for the official blood test if I can manage it this time. If I do any pregnancy tests beforehand I run the risk of getting false positive again (which happened the previous two times from leftover IVF hormones!). And even if it were an actual positive I wouldn't know the HCG value until the blood test anyway and it could end up being a chemical. So best just to wait it out.

Thanks so much to all my online friends who have been supporting and following along by the way!
Posted by dubliner in Deutschland at 3:30 PM