This week started off with my appointment at the gyno for a checkup. It had been five weeks since my last one! My mother in law came with me and it worked out well, she kept me company and loved getting to see her first grandchild. Everything went great. The doctor took various measurements and didn't see any issues. I had thought the scan would be even longer though. I'd been told the 20 week one takes ages but mine only lasted around 15 minutes (my friend told me hers had gone on for an hour!). I had kind of been hoping to see the face more but you can't really make out anything. The doctor said we could pay extra for a 3d scan at a different clinic after 24 weeks so we'd consider getting that done. However I spoke to another friend who told me the 3d scan isn't that great, it can be hard to get a good image if the baby is facing the placenta.

The great news is that the doctor was able to tell me the gender this time! My gut feeling was right, it is most likely a GIRL!! I'm thrilled. That's not to say I wouldn't have been equally delighted to be having a son, I just have had this feeling it was going to be a girl since I got pregnant and it's really nice having it confirmed. After our appointment I went into the shops with the aim of buying something for the baby to surprise my husband with. When I was in the shop, it suddenly occurred to me that this was the first time I was buying something for OUR child. There have been so many times in the past where I've gone to the baby section to buy presents for friends' kids and quite often ended up getting emotional thinking it might never happen for us. It took me ages to pick out something as it felt like such a significant moment!

I had been planning to get something pink but I didn't particularly like the things they had. However I found a cute peach and white stripped babygrow for a newborn and I picked some little white socks as well. Later at home I wrapped the items in pink ribbon and put them in a present. I wrote "Daddy / Papa" on the front. It felt like it took ages for my husband to get home from work that day. Both his Mum and I were really excited to find out his reaction. As soon as he arrived I called him into the sitting room and gave him the present. His Mum was ready with the camera. As he was opening it I started crying! I hadn't meant to, I just got overcome by the moment. He was really happy and we hugged. He got a little emotional too! Probably from seeing me tearing up. It was such a special moment. His Mum got some nice pictures too. Google turned them into a little Gif video and it is really cute. I skyped my family after and told them the news and they were all delighted for us too. And then I messaged some close friends. It was such a happy day! 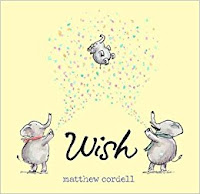 This morning hubby and I discussed some names. We currently have two favourites. Both have Irish origins but we would use the international spelling. We also went into the future baby's room and discussed how we would organize it. I showed him the "Wish" book I bought and started crying once I read it. It is a story about a much wanted baby and the parents' journey to get there. I can still remember the heartbreak we went through before now and I'm so grateful and amazed to be 21 weeks pregnant right now with a healthy baby. We also looked at the children's books he had bought from his trip. It was such a nice time thinking about the future. I couldn't be happier!

My mother in law commented that four months seems ages away and she can't wait. I can wait though. It's not that I'm not really excited to meet our baby, which I am, but I am also enjoying this time. Having my child growing inside me is special and it's nice to have these months to think about the future and plan. I've been reading books on childbirth and life with a newborn. In another month I'll be starting the third trimester already which seems mad! 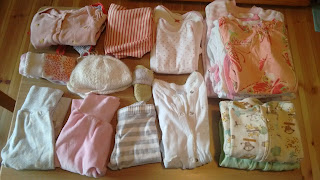 A friend from my book club very kindly dropped off her old maternity outfits to me plus a heap of baby clothes her kids have grown out of! Newborn stuff are so tiny, like outfits for a doll. So cute! I hope I'm not jinxing things by already getting stuff for the baby. I still have four months to go after all. But other girls on my due in Feb facebook group already started buying things weeks ago. PEople aren't as superstitious as they used to be in the old days.

And the other news this week was that I met my Hebamme (Someone in Germany who visits you and the new baby) finally! She's nice, made a good impression. However, very alternative! I think most of them are like that. For instance, I mentioned getting the flue vaccine and she said that she would never get the flu vaccine as it's putting toxins/poisons into your body. She also didn't like how many ultrasounds I've had already as she said they heat the placenta and babies don't like them as they are so loud. I have heard those theories before but I don't think it's so bad every few weeks. They offer some classes at the centre she works at such as pregnancy gymnastics. Not sure what's involved there but I might try it out sometime. The other class they have is a mediation/relaxation one which sounds nice.

The Hebamme also asked if I'm anxious when she heard that this is an IVF pregnancy. I said I have been but it's gotten a lot better. I think I've been managing the anxiety quite well in general. She basically said I have to stop myself from worrying as it's not good for the baby. I didn't like that advice as now I'll just worry that my worrying is harmful for the baby! I would have preferred if she had told me everything will be fine. I do think the baby has some awareness of the mother's feelings as your heartbeat would be slower when relaxed and stress releases the hormone cortisone whereas the happiness hormone is oxytocin. However I found some of her theories a little too far fetched for me. At the meditation class they offer for instance, you basically talk to the baby and teach them how to be born according to her! I can't believe that the baby can hear my thoughts. However I'll still go to that class and try it out. Might be a way to make some new friends.

Overall it's been a good week. I'm still just incredibly delighted that I'm carrying our child. This week hubby even got to feel a few kicks too! I notice the baby randomly but often in the evenings. Like really active for a few minutes then quiet again. It's always a nice reassurance when I feel her moving about.
Posted by dublinerinDeutschland at 10:54 AM