After we got the all clear from the harmony blood test last week both hubby and I decided it felt like the right time to share the news more freely at work. He spoke to his boss and told him that he plans to take some of the parental leave. His boss knew about our struggles to have children and was happy for us which was sweet. I had a chat with my manager and that went well too. Once that was done I gradually started telling a few more colleagues who I would interact with quite frequently. I figure the news will probably spread. Everyone was nice about it and congratulated me. There was one comment that bugged me though! This one colleague acted surprised and said he thought I didn't want kids. He reminded me about that (very awkward) time last year when he had asked me about children and according to him, I hadn't seemed keen.

Basically he asked me in front of several other colleagues what my family plans were. So rude and inappropriate! I think I was in shock at the bluntness of such a question and I basically answered vaguely, something like "not yet" and changed the subject to talk about my upcoming Australia trip. That guy is just totally clueless. Of course he assumes that a couple who don't have kids must not want them because if they did, they would just have them, right? Easy peasy. I'm very tempted to say something to him about it if the right opportunity arises. He also made the comment about thinking I didn't want kids in front of several other colleagues. He then told us that he's just persuaded his wife to try for a second baby. I know for a fact that the other colleague he mentioned it to has been trying with his wife to have a second child and she's had a miscarriage. So I can imagine the comments could have bothered him too. Anyway if I have a chance just the two of us I will tell him that actually it was very difficult for us to get this far, without going into all the details, and mention that asking someone about their family planning isn't appropriate as you have no idea what might be happening behind the scenes! I'll just have to figure out how to say it tactfully in German.

People have generally been surprised to hear about the pregnancy so I guess it's not as obvious as I thought! I've barely put on any weight so far probably due to the fact that in the first trimester I didn't have much of an appetite with the nausea. I think I'm eating better now though so I'll probably start getting bigger soon. According to a pregnancy weight calculator I found online, I'm slightly under the amount I should have gained by this stage. I'm sure I'll catch up though! Generally I've been eating reasonably healthy but if I'm craving a treat such as chocolate or crisps, I go ahead.

I've read around week 18-20 first time Mums should be able to start feeling kicks! I've felt nothing yet. Unless I've mistaken it for indigestion! My next scan is going to be at 21 weeks not 20 as my gyno is on holidays again. I'm disappointed as hubby won't be able to make it this time especially as the anatomy scan is a big one. I tried to get a different appointment time that week but they are all booked up. However I then had the idea that I could see if my mother in law would like to come. She was delighted to be asked! I think it will be nice for her to be involved. This is her first grandchild and she's really excited. The only weird thing is that she'll probably find out the baby's gender before hubby! She's promised she'll keep it a secret though. I was thinking after the scan maybe I would go and buy little pink or blue socks and surprise him with them later after work! 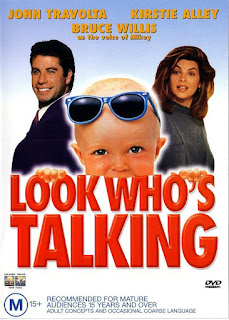 This week hubby has been away on a work trip. The house feels really quiet without him. At the weekend I met up with friends for lunch and some shopping then relaxed on the couch watching "Look who's talking". A pretty quiet Saturday night! That's such a funny film. The maternity fashion in the 80s was basically like a big tent! Of course the childbirth scene looked pretty painful as per usual in the movies with the main character begging for pain relief. I loved the scenes where you'd hear what the baby is thinking in womb.

Sunday I met up with a good friend here. She also went through years of infertility - five in this case before finally having a daughter. Her little one is at a fun age now, 10 months. We took her to the playground and she really enjoyed herself. She's also very friendly and good with people. There was a stage when she was only a few months old where she was very attached to her mum and would cry when I tried to hold her. Luckily that's changed. Next year our baby would be around ten months old at Christmas time. The thought of bringing my baby home for an Irish Christmas with my family warms my heart!

The round ligament pain is back now. It feels like general dull aches and pains during the day but gets worse if I sneeze or cough. Then at night when I change positions while sleeping I'll often get woken up with the pain and it takes awhile to get comfortable again. I've also started waking up an hour or two early each morning needing to pee. So it hasn't been a totally restful sleep. I've noticed an occasional heavy feeling around my pelvis. Apparently perfectly normal as the uterus is now the size of a honey melon! However overall I'm feeling good. My "bump" has popped out more and I love it. I enjoy singing to the baby while I'm getting dressed in the mornings. "My bump, my lovely baby bump" (sung to Black eyed peas "my lovely lady lumps" tune). When I'm out and about and I see something nice, such a pretty autumn leaves or a sunset I think how I can't wait to show our child all the great things this world has to offer one day.

Posted by dublinerinDeutschland at 11:53 AM