When is the right time to talk about gun control?


I rarely get political on this blog. It's not that I don't have a lot of thoughts and opinions on what's going on around me, it's that so many topics seem to be extremely decisive these days with so many people strongly on one side or the other finding it hard to come together in the middle to reach any common ground.

What's upsetting me recently though is the lack of proper gun control debate in America. The Las Vegas shooting was absolutely horrific and tragic. I feel awful for all the victims and their families and I find it so hard to comprehend how someone could do something like that. Prayers and thoughts are great but what is also necessary after something like this is action. Clearly the laws need to change. Gun violence in the States is way too prevalent and it is not ok to just accept it as a part of life now!

It is so frustrating though when people try to bring up gun control but are shut down because "now isn't the time". I've also seen comments such as that "leftists are disgusting" to be bringing up politics at a time like this. At the end of the day, both sides want an end to tragedies like this. So if now isn't the right time to discuss gun control, when is? I've also heard arguments saying these events couldn't have been prevented. Those people who think that way don't seem to even want to try which just annoys me. Other countries don't have as many gun deaths so surely the States can look to other examples and learn from them. 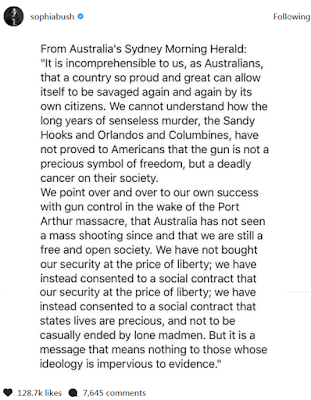 A few years ago there was a bill with the aim of banning people on the no fly list from being able to buy a gun. Something like 80% of the general public agreed with it. When it was brought to congress it was overruled and didn't even get to a vote! The NRA lobby are too powerful there it seems. Then there are other opposers to gun control who think that we want to take away all guns and go on about the importance of their second amendment rights. The objective isn't to ban every weapon. The idea is to bring in restrictions such as more thorough background checks, particularly at places such as gun shows where I believe someone can buy one without a check at all. Also is there really a need for a person to have an assault rifle or machine gun?! And maybe there should also be limits to the amount of guns one person can own. At the very least let's do some more research and come up with a plan.

Now, I realise I'm saying all this as an outsider. I'm not American. I'm European and just trying to understand things there. But to me it seems clear. We all want to reduce gun violence. So why not work together to find a solution instead of refusing to even talk about it?
Posted by dublinerinDeutschland at 10:25 AM