This morning my husband texted me while I was at work to tell me he was reading about week 20 and the baby is now the size of a large banana! I'm finding it really sweet how involved he is being because I know some men don't really bond so much with the baby until after they are born whereas as a woman you have nine months of the connection. He even brought a little present for the baby back from his work trip - two children's books. Our baby got a second present this week too! One of my mother in law's friends knitted little booties and a blanket. So thoughtful and nice. It's mad to think I'm halfway through the pregnancy now! Actually the last few weeks have gone quite quickly. I'm excited for my next scan which is coming up soon! 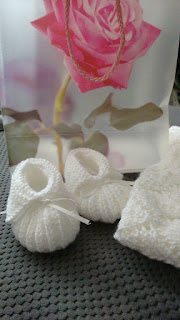 I've come down with a bad cold the past few days. It started with just a runny nose and feeling a bit run down but now I've also got a horrible sounding cough making it hard to sleep at night when I have a coughing fit. I've been trying to rest up as much as I can and drinking hot teas. Hubby was worried it might develop into a chest infection or pneumonia so I went to the regular doctor after work. It was nice telling the doctor our happy news as she knew we'd been trying. I guess I told a lot of people! She said she'd rather not prescribe me anything as it will probably get better by itself, which is fine by me. She wrote me off sick for the rest of the week. Even though I've been feeling miserable with this cold (it's the worst one I've had in a long time!), I still feel guilty about having to miss work. There have been a lot of projects and deadlines lately- plus stress to be honest. I feel a bit like I'm letting people down but I have to put me and the baby first right now.

I also got some unexpected good news a few days ago. I have more holidays to use up before my maternity leave starts than I'd realised. 14 days instead of the 6 I'd thought I had basically. I'll barely be working at all really between now and mid January at this rate (due date towards the end of Feb)! In Germany your maternity leave starts six weeks before the birth. What do women normally do then I wonder? Meet up with other friends who aren't working? Cook and freeze lots of meals for when the baby arrives? Decorate the nursery? Relax? Read up on childbirth and parenting? My sister got me a book about baby development and I've been enjoying reading about it.

I think I'm definitely feeling some movement now which is great! When I place my hand below my belly button while sitting down, I notice something now and then. Sometimes it's almost like a little tap against my hand which could be a kick. Other times it's it's sort of like a vibration or muscle spasm in my stomach basically. I've started to recognize the feeling.

Of course this could still be gas, but I like to think it's the beginnings of starting to really feel the baby and it should just get stronger from now on! While watching tv last night there were two times where I definitely felt something for a second. Then today at my computer again. That must be the baby! I'm excited for when hubby will be able to place his hand on my belly and feel the baby move too. Not much else to report, my next doctor's appointment is soon and then we should hopefully find out the gender too! 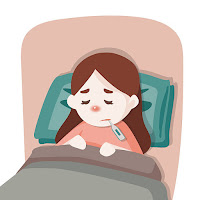 Posted by dublinerinDeutschland at 9:18 AM