So my last updates ended up being pretty long! Well done to those of you who made it through the entire thing. It's making me wonder whether I should break up the weeks into smaller chunks so that's what I'll try now.

I've been experiencing pain on my right hand side above my hip. At my last appointment I mentioned to my doctor that I'd had various cramps and pains but in general they weren't severe and usually went away and he didn't seem too concerned. The next day the pain on my right seemed to get worse! I noticed it more during movement such as when I'd get up from sitting or turn around in bed during the night. It felt sort of like a stitch or pulled muscle. When it didn't seem to go away I started wondering whether I should go to the hospital to get checked out (this was outside my doctor's opening hours). I had more or less decided I would go to the hospital when I was googling and started reading about something called round ligament pain and realised that's exactly what it felt like. I also messaged several friends who'd had kids to ask them if they'd had something similar. Some hadn't but the majority had. I decided I would wait and see if it got better and luckily it did. I still notice it sometimes but it's not as painful. It seems like aches and pains are to be expected!

Even though I am feeling delighted to have reached 17 weeks, the anxiety hasn't gone away completely. Instead of worrying about miscarriage I've started fearing something going wrong at the birth, even though it's ages away. I've had two surgeries in my lifetime and I have a lot of adhesions and scar tissue as a result. I was told after the operations that the adhesions around my intestines could cause a blockage at any point and that would require emergency surgery. I was googling and saw that although adhesion surgery during pregnancy is possible it carries high risk of infant death and even maternal death. I decided to stop reading those articles! I did take serrapettase for a few months before getting pregnant so hopefully that dissolved some of the adhesions. And there is no point worrying about something that please God won't happen! Stillbirth is another worry. It's not such a far fetched thing as it happened to one of my best friends from home.

I am trying to not think about all those things as obviously worrying and stressing isn't good. I doubt I'll be able to fully relax until our baby is actually here safely. I've been trying to remind myself that so far my body has done what is is meant to and everything has been fine. When I share some of my worries with hubby, instead of telling me that the things I'm anxious about are really unli kely or whatever, he starts to look worried too. So I don't think he's the best person to share all my anxieties with! I think the next time I'm at my gyno I'll tell him about my worries in terms of my previous surgeries having an impact and hopefully he'll give me some reassurance. Anyway later today I'll be phoning my doctor about the harmony test results. I'm feeling a little anxious and really hoping that will all be fine. 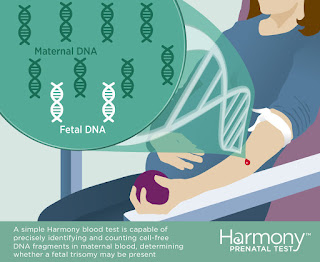 So the update is I must have phoned the doctor about thirty times yesterday but couldn't get through! He has certain Sprechstunde (available speaking times), just a short window really. 4.30 till 5pm on Monday and wednesdays. I had to get to work extra early that day, take a short lunch and rush home in order to try to make that time slot. At first the phone was engaged every time I called. Then finally at 5pm I got through but no one answered, making me wonder whether he just ran out of the door once the window has closed! I tried several times after but still no joy. It was frustrating as we really just want to get the results of the harmony test now to find out if everything is ok. This morning I phoned and was told that I can only be given the results by the doctor and "that's what his Sprechstunde are for". His receptionist can be a bit snarky. I explained how I HAD phoned. She said he's busy today and not there tomorrow so we have to wait till Monday and try again then. Frustrating!

Anyway, I guess I am used to having to work on my patience by now so whatever. I decided I'll hold off on telling more people in the office till next week. Actually I did read that some women don't tell work till they are 20 weeks. They probably wait until after the anatomy scan then. Depending on your figure, it IS possible to conceal the pregnancy. I take back what I wrote before saying it is very hard to hide. I do have a small "bump" but it doesn't look that different to being bloated or whatever and unless someone is looking for it it's not so obvious. There was a team lunch I was at a few weeks ago where the waiter brought us all a digestive shot to drink after the meal, with alochol. I turned it down but so did some other colleagues who didn't want to drink during their work day so it wasn't so noticeable. And even though I've been nasueas, I haven't had to throw up at work luckily, only at home!

The majority of my friends here already had kids (most have two by now). It would have been nice to have gotten pregnant at the same time as some of them. However I love this baby now and I'm not going to live in the past wishing it had happened sooner. I do have one friend here who is two weeks behind me though! I met up with her yesterday which was really nice. We are going to try to go to the same Geburtvorberitungskurs (birth preparation class) in the hospital if possible. Most of the courses have already been booked out! We are hoping to get the one starting November which goes on till January. It'll be two hours once a week.

At my husband's work there are more pregnancies too. I am surprised at how fertile all his work colleagues seem to be. It looks like we are the only ones who had difficulties, judging from how soon most of them seemed to have gotten pregnant after their weddings. Nice for them not to have to deal with infertility of course! Sometimes I feel a little sting at people who are easily able to have several kids wheras we have accepted that we'll most likely just have one. And I hate when people make comments about only children being lonely or how it's selfish for parents to only have one. I can imagine that our one will be very happy! We can make sure to go on plenty of "play dates" and maybe get a pet at some stage.

I've noticed that I've been feeling much better in general! It's like a fog has lifted. I don't have the nausea as bad at all anymore and I'm feeling more energetic. I guess this is why the second trimester is considered the "honeymoon" phase! I had a productive week in work on a big project and was feeling very proud of myself. So overall it's been a good week. I've even been more social too. Now I'm not as exhausted all the time, I've started meeting up with friends more often which is fun.

Hubby finally managed to get through to our doctor and we found out the results from the harmony test. Everything is great! The baby only has a 0.01% probability of any of the three major defects. Such a relief! I'm glad now we did decide to go for the harmony test in the end, it's so nice to have that peace of mind. The doctor even said that the results were hervorragend meaning excellent. We already feel like proud parents! My thyroid levels were also fine - TSH 0.7. And my iron levels are a solid 12.2. So good news all round.

Posted by dublinerinDeutschland at 10:25 AM