Everyone seems to be talking about "The Handmaid's tale" recently. It was written in 1985 by Canadian author Margaret Atwood but has gained more fame recently after a tv series has come out based on the book. I was intrigued by the premise and happy when it was voted as our next novel in my book club.

I knew that there would be some infertility elements so I was prepared for that. The book is set in a dystopian society in the future. The majority of women are barren and infertile. It seems like a lot of the men are sterile but it is a male dominated sexist society so the male side isn't acknowledged openly. The women who ARE fertile are known as handmaidens and they are first trained and then sent to live with a couple in order to try to conceive a child with the husband which will then be raised by the man and wife. A few months after the birth, the handmaiden will be sent elsewhere and the cycle continues. It is a several tier society. Wives have more power than the handmaidens but not as much as the husbands. There are women called Marthas who are barren that work as housekeepers. There is a strong police presence and spies known as "Eyes". People who say or do the wrong thing get taken away and tortured or worse.

The book centers around the story of one handmaid, "Offred". That is the name that has been assigned to her. All part of losing individual identity. Initially she is a little like a zombie, just going along with the life she has now. Well, it's not like she has much choice in the matter! She often wonders about her ex boyfriend and child who were taken away from her. Without giving too much away, she gradually becomes aware of a secret resistance movement.The husband of the house she's living in also starts wanting to bend the rules with her. As does the wife. Both of which lead to her taking more and more risks.

In terms of the infertility element I found myself often feeling sorry for the wives who weren't able to have their desperately longed for child. It was awful how the handmaids were reduced to baby making machines, which just made me think of how ridiculous it is to base a woman's value on whether or not she can conceive. Women are so much more than that! The book was really good. Not like anything I'd read before. Once I got into it, I definitely wanted to find out what would happen next. I thought the ending a bit abrupt though, a lot is left open. The book has some disturbing scenes and the scary thing is that the world described doesn't seem all that far fetched at times. Let's hope it never becomes a reality! 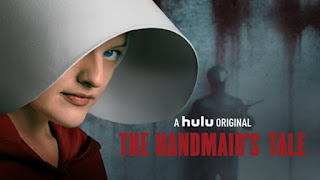 Posted by dublinerinDeutschland at 6:34 AM