Not much to report really for this week.
This week was my first birth preparation class, called Geburtsvorbereitungskurs here. In Germany your health insurance covers the course and you just have to pay the fee for your partner. All the classes at the hospital were already booked out when I looked into signing up at 16 weeks but I managed to find a course locally held by the Chinese lady I did acupuncture with before. Even though my experience hadn't been great and I don't think acupuncture is for me I've heard her classes are good and she had a place available. The course she offers has two evenings with just the women and then two weekend mornings with partners. I had heard that the birth preparation classes can be a good way to make friends so I was hoping that might be the case. 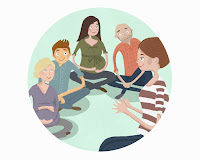 The instructions were to dress comfortably so I wore black maternity tracksuit bottoms which sort of passed for work trousers (I think!) with a long top. There were about ten of us in the class and we sat in a circle on mats on the floor with cushions for our backs. It felt a bit strange for me to be part of this pregnancy club now after all the years we had been struggling with infertility. We had to go around and introduce ourselves. Three of the women are on their second or third babies but the majority of us are pregnant with our first child. I wondered about whether anyone else there might be having an IVF baby too, or have had difficulty but no one mentioned it and I didn't either. Maybe at a later point if the opportunity arises.

The due dates range from December to March. We learnt about what happens to your body during the nine months and birth, discussed pregnancy symptoms, the hospitals in our town in terms of advantages and disadvantages then general newborn care and breastfeeding. Some stuff was interesting but other things I knew already. The end of the class was spent trying to sell us things which I didn't like though! The Hebamme who gives the classes clearly has some sort of agreement with another lady who sells baby stuff and she came over to show us the things. I already have plenty of baby clothes and blankets so didn't really like having to spend 40 minutes looking at more stuff. The things seemed expensive too. Like 50€ for a snow suit or 37€ for a babygrow. At that stage I was tired and hungry as I'd gone to the class straight after work.

Anyway, the other girls in the course seem nice but everyone was a little shy and no one was exchanging numbers or suggesting meet ups. Hopefully at a later stage we could set up a whatsapp group or something. It would be nice to have some people to meet up with once the baby comes and to keep my German up while I'm out of the office! One of my other pals here who's american commented that she has a group of friends with babies around the same age as hers and they often go for play dates together. She mentioned that she feels more integrated living here now she has German friends.

I've also started having braxton hicks or practice contractions I think! I noticed an uncomfortable feeling around my pelvis area and cramps for the first 20 minutes of the birth course and then the next day in the late morning. I did start to worry a little about pre term labour but the pains weren't so bad and after asking some other women in my facebook group, apparently if it were real contractions I wouldn't be able to talk or do anything else during them! Off to Ireland tomorrow.

Overall I had a nice trip to Dublin. I got a chance to meet most people again and now I'm ready to stay put in Germany to prepare for the baby as I get into the third trimester. There were some lovely moments catching up with friends and everyone has been so supportive and happy for us which has been really lovely. My aunt commented that we shouldn't buy too many pink things in case the doctors get it wrong and we end up having a boy! My doctor did say he is 100% sure of the sex so I think it should be fine. I agree with the sentiment that baby girls shouldn't just be put into pink clothes and I do plan to buy a mixture of colours. However I'm a feminist who also likes wearing pink so I don't think there is anything wrong with it personally! I guess I would avoid slogans that just say things like "princess" though. It was strange saying goodbye to people thinking the next time I will see them I will have a young baby with me, please God! We plan to fly over to Ireland next Summer.

Something really awful and unexpected happened while I was in Ireland though. The younger sister of a good friend of mine died unexpectedly. The poor family are devastated and it is just a nightmare. Depression is an awful illness that takes far too many young lives. I was glad that I was home and was able to visit my friend. My heart aches for her and her family. I clearly remember almost 13 years ago when my Mum died and what a horrible time it was. This has actually been the third tragedy under various circumstances involving someone in their 30s who our family knew since the start of this year. Of course death is always terrible, but there is something even worse about it when it is a young person with so much life ahead I think. Things like this just remind you all the more how short and precious life is. 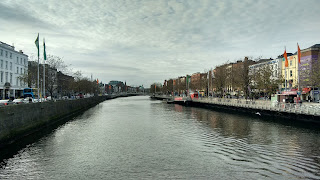 In terms of the pregnancy and travelling, I didn't experience any complications flying and wasn't even asked to show the letter my doctor had given me saying I was safe to fly. I'm glad I made the trip over.
Posted by dublinerinDeutschland at 8:00 AM