Well the title says it all unfortunately. Obviously I wish I could be sharing happy news. The first few days in Ireland when I still thought I could be pregnant, I had a great time. It was really nice spending so much time with family and catching up with friends and it was also an ideal distraction from the stress of the past few weeks. On Christmas eve morning I did a pregnancy test and there was a very faint second line. That told me nothing though as I had given myself a shot of the HCG hormone three days earlier which could have still been in my system. I wanted to test again the next day but hubby wouldn't let me as he didn't want a potential bad result to spoil my Christmas.

The following day I woke up extra early and thought I felt different and decided to try again. I thought it would be a stronger positive and was thinking how nice it would to give my family the good news while I was there. The test was negative. At that stage I was just in shock and really upset. I had been so sure that it had worked this time that I hadn't really thought about the alternative. When I joined my family in the kitchen for breakfast I just burst into tears. They told me it was still early and not to give up hope until the blood test but I just knew. Still, I read some stories of women online who had negative pregnancy tests but nonetheless got a positive result in the end and I was praying for a miracle, though I just knew something like that wouldn't happen to me.

I felt really down that day. Having my sister there helped a lot and it was good to talk about it all. The GerMann was also really supportive and loving. We met up with a relation who has been dealing with serious health problems lately but she said she refuses to think "poor me" since so many other people are going through worse. Everyone has their own struggles (even though you would never think it from facebook sometimes!). Her courage also inspired me. The last few days of our trip I started to feel a bit more optimistic about things. I still knew it would be a negative result but I was able to focus on the good things in my life; that I have a great husband, my health and lots of people who care about me and that we would find a way to be ok whatever happens (even if children are not on the cards for us).

Today has been tough though. Even though I was prepared, getting the negative phone call is never easy. And I also feel a bit homesick. We had such a nice time in Dublin. We were constantly busy actually with so many people to spend time with that out house here in Germany now feels quite empty and quiet. I'm very disappointed as you can imagine. I really thought that IVF round three would work. Especially since I did all the extra immune treatment against my elevated natural killer cells. The GerMann thinks that this means that I don't need the immune treatment but at best your odds of IVF working are only around 30% anyway. 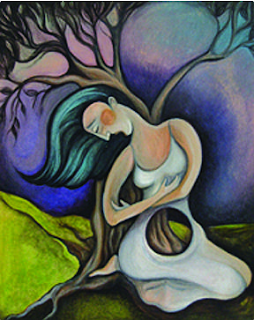 It is hard to know where to go from here. I would like to get a consultation at another clinic which is over an hour away which I've heard good things about. If they think they can help us then I would do a fourth IVF with them. That would be my last one though, I don't want to keep doing IVF over and over. Hubby would stop already. He thinks it would have worked by now if it is going to, that we should just try naturally and start attempting to move on. It can be hard when you aren't on the same page. He's agreed to going for a consultation at the other clinic though. They are closed now over Christmas and they have long waiting times but hopefully we'll get an appointment there within a few months. In the meantime we've been thinking about planning a holiday together. Funds are tight what with all the house related expenses and all the IVF and immune treatment but it would be good for us to have something to look forward to.

I considered the idea of going straight into a fourth round immediately. January and February are normally dull months anyway, maybe I could just get through that and then I would be done with it. Then I wouldn't need to start all the intralipids from scratch either. You see you are meant to get two rounds of intralipids done in the month before you start IVF so if I wait several months I would need to get them done again, that is if I would still continue with the immune treatment. However I think it would be too much for us to go straight into another round and I also feel let down by my clinic and think that the other place might be able to give me a better protocol. They also offer natural IVF there I've heard. Our plan is to just try to get our lives back and take a break from it all over the next few months and then depending on what the other doctor advises we'll decide whether to go for a fourth round or not. We also have an appointment at our current clinic in a few weeks to discuss what went wrong.

We did have a wonderful time in Dublin over Christmas. It had been ages since my whole family was all together. We didn't manage to meet up with everyone we would have liked to but we got to meet the majority of people. We're missing my cousin's wedding though since we thought I would be pregnant at the time and have to be back in Germany for treatment and monitoring but it turns out we could have gone. (Too late now, have already RSVP'd, plus haven't booked the days off work, no flights). Also I missed my Christmas work party which was around the egg retrieval. So that was annoying. Now we are finished IVF for now at least we can start doing things again and being social!

In February we have two friends from Ireland coming over to visit so I'm excited about that. We had some really nice chats in Ireland too. We met up with good family friends and I was open about our struggles to have a baby. It turns out it took them eleven years to have their son and they were able to relate to how hard a time it is when you wonder will you ever have children but can't look into the future. We have so many people praying and hoping for us. It will be sad telling them all that it didn't work. My mother in law sounded really upset on the phone when I spoke to her earlier. Infertility doesn't just affect the couple going through it but also their family, relations and friends. It's been a hard few days but in general I'm feeling ok and I know that we will find a way to keep going forward whatever the future has in store for us. I won't let this beat me.
Posted by dubliner in Deutschland at 11:10 AM