Finding it all hard going

Where do I start? Yesterday I had the egg retrieval procedure. Even though it was my third time, I don't think it gets any easier. I still felt anxious beforehand. Afterwards I was very tired and groggy which I was expecting but I also had really bad cramps. There was a nice nurse looking after everyone that day and she gave me some strong painkillers. While I was recovering I remember just laying there thinking that I hate putting my body through all this and I don't want to have to do another egg retrieval again. General anesthetics often lead me to feeling quite low afterwards I've noticed in the past so it could be partly down to that. But I at the moment I've been feeling like I've reached my limit and I don't want to do IVF again! 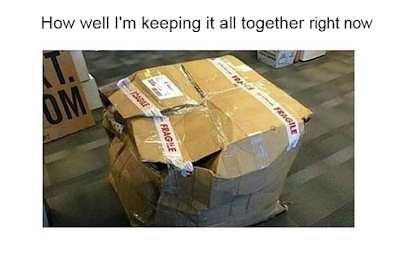 After a few hours and a cup of tea the cramps were much fainter and I felt more like myself again. We went in to the check up with the doctor. This time it was the lady who I nicknamed Dr. Gentle on this blog. She's really nice. She looked at my chart and said they got four eggs from me this time. We were really happy with that news! Four eggs probably doesn't sound like many to the average person doing IVF but me being a poor responder it wasn't too bad at all. Our best result ever considering we got two during the first IVF and only one egg last time! I'd had six follicles so I guess two of them must have been empty. Yesterday afternoon and evening we were feeling generally happy and I texted everyone how it went. I was particularly excited thinking that we could even have extra embryos to freeze this time! That would be great as it would mean if this round fails I wouldn't have to go through the whole injections and retrieval again.

Today I've been feeling more disappointed though. Of course it wouldn't be IVF without being an emotional rollercoaster! The lab called and said that two of the eggs didn't fertilize at all! They didn't know why. We still have two embryos growing now though. And believe me we are grateful to have two, don't get me wrong. But. Sigh. I couldn't help feeling sad that we'd gone from having four eggs and hope for extras to now just having two. I've also been wondering whether I did something wrong. I've barely had any alcohol or caffeine the past few months, tried my best to eat healthy and taken supplements but could I have done more? I guess it's quite common that not all eggs fertilize. I'd just been lucky and had a 100% fertilization rate in the past. Maybe my eggs are starting to get old! Who knows, but I was feeling down today.

Yesterday afternoon ended up being a bit stressful trying to plan and figure out the extra immune treatments. I have so much to keep track of now, what with the usual meds from my fertility clinic doctor such as progesterone tablets every 8 hours and HCG shots on particular days, but now I also have prednisolon which is a low dose steroid, baby aspirin and Granocyte an extra injection. The latter I won't start taking until five days after transfer and then only on certain days. We went to the pharmacy and it costs almost 800€ here in Germany! It's not covered by my health insurance. We remembered that the immune doctor had told us it's much cheaper in France so when we got home hubby spent over an hour researching which pharmacies could have it. We found a place that delivers to Germany via express post and it only costs closer to 400€ which is great. However then I started stressing out that the fertility clinic doctor had given me the wrong amount on the prescription. It looked like I hadn't been prescribed enough to last until the pregnancy test. Anyway we wrote to the place in france to clarify the amounts and it's ok now. If I get pregnant then I would need to get a new prescription asap to order more though. I was chatting to my sister last night and just saying how stressful it is trying to keep track of everything I need to take and when and making sure I have the right amounts!

This morning after the phonecall I had a bit of a cry. I guess I'd had high hopes for the antagonist protocol working wonders and was really hoping it would lead to me getting way more embryos than usual. Maybe the natural IVF would be better in my case. Today just reminded me that you never know what's going to happen. I'm also just feeling down that we have to do IVF at all. And even if I do manage to get pregnant, it would be considered high risk and I'd have to be monitored closely (my immune doctor said)! I'm doing the intralipid infusions and taking low dose steroids to prevent my overactive immune system from treating the embryos as foreign bodies. On top of that I'll be injecting myself with Granocyte, something used for cancer patients, because I am missing certain KIR genes which are important for placenta formation and it is has been found to help reduce the risk of miscarriage in women who lack those genes. It's all just overwhelming sometimes!

But anyway I need to pull myself out of this slump. We still have two potential future babies growing right now in a lab so I'll try to focus on that. Tomorrow I go in for a two day transfer. Once I have them on board I'll start feeling happy and more hopeful again! There's nothing wrong with a good cry now and then though. No one can be strong all the time.
Posted by dubliner in Deutschland at 9:42 AM