Before work on Thursday I went to the clinic and did a blood test and was told I would receive a phone call between 1 and 2pm later that same day. I had taken a half day off from the office so that I could be at home for the news and have some space and time to process it, good or bad.

Waiting by the phone was tortuous and 2pm came and went and still no call. I tried phoning the clinic only to get their answering machine. I gave it a little more time and then was about to go and do a home pregnancy test when the call finally came. The doctor's asked me to confirm my name and date of birth and then said the news was mixed.. 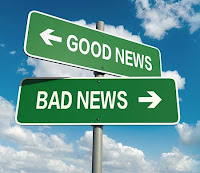 I'm pregnant but my HCG hormone level is very low, only 28, which could indicate an imminent miscarriage. They scheduled me an appointment for a week's time for an ultrasound though I might not still be pregnant by then, will have to just wait and see.

I was totally confused and in shock after the phone call. I'd been expecting and preparing myself for either a clear yes or no, good news or bad new, not mixed! After googling more information on what HCG values are normal, it seems that having a low one might not be so bad if the levels start increasing dramatically over the coming few days (though anything under 100 is considered low for an initial value). It's just too soon to tell basically.

Later that day I started feeling happy and more positive and decided I'm going to enjoy being pregnant for as long as I can. At this stage it's so early and it could really go either way but I'm cautiously optimistic!

Posted by dublinerinDeutschland at 5:30 AM