For anyone who doesn't know the basics of how IVF works, it normally goes as follows; the woman takes hormones for around two weeks to stimulate her ovaries in order to produce a lot of eggs. After this there is an egg retrieval procedure, usually done under general anaesthetic, when the eggs are removed. On the same day the man provides his sample. The eggs and sperm are then put into a petri dish together and left overnight to see how many fertilize and become viable embryos. Several days later one or more of the embryos are then placed into the womb and then all you can do is wait and hope that at least one of them implants and becomes a viable pregnancy.

I was feeling very nervous about the the egg retrieval procedure, especially the few minutes right beforehand. The nurse told me to think of a nice place like a beach and then when the doctor put the anesthetic into my arm I remember thinking, "I'm still awake, don't start yet!" but then starting to feel drowsy very quickly afterwards until I was out completely.

The next thing I recall it was over and I felt like I had been woken from a very deep slumber and I still felt very sleepy and could barely keep my eyes open. The nurses helped me back to the recovery area where I dozed for the next hour or so on and off while on an IV drip. I remember feeling quite shivery at one stage and I needed several blankets to keep warm. Also my blood pressure went really low so the nurse gave me an injection into the IV in order to kick start my circulation. After that I began to feel more and more awake. 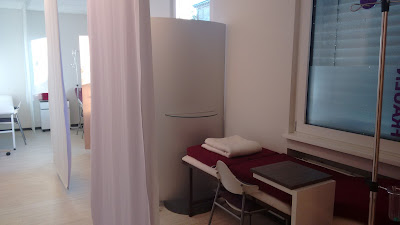 The GerMan and I waited until the doctor was able to see us again for another ultrasound to make sure everything looked ok after the op. It was then I was finally able to find out how many eggs were retrieved. Of the six follicles four were empty so the doctor only ended up getting two eggs which as you can imagine was very disappointing. Two eggs doesn't give us great odds (I read somewhere recently that fifteen is the ideal number to lead to a live birth), and I definitely won't have any extra embryos to freeze for any future attempts.

I was told not to give up hope, though, as quality matters much more than quantity. The doctor has seen some women with as many as forty eggs from a single retrieval who don't end up getting pregnant and others with only a single egg who do...so you just never know really. The clinic will phone me tomorrow to let me know whether the two eggs fertilize or not. It's going to be totally nerve wracking waiting for that call, I can tell you!

Posted by dublinerinDeutschland at 11:28 AM