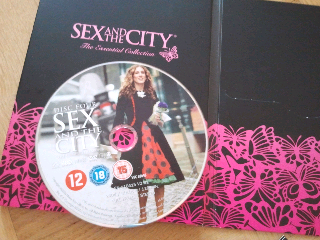 I have recently been watching old episodes of Sex and the City. The final few episodes in particular struck a cord. In case you have not watched the show I will sum it up. The lead character, Carrie, is dating a Russian artist (in the final season) who asks her to move to Paris with him indefinitely. After he asks her she spends the rest of one episode thinking it over and she has a big fight with one of her best friends who does not approve of her new man or the idea of her moving. I thought I would compare my decision to move to Carrie's...

1) Carrie does not speak French, but she plans to learn.
I studied German in college. My level was rusty but I had a good basis on which to build on.

2) Not all of Carrie's friends like her boyfriend. They mainly find him arrogant and Miranda says she does not recognise who Carrie is with him. I also think they have only been together for less than half a year.
Luckily my friends and family all like my GerMann and think we are a good couple. We had also been together before so even though we were only just back together for a few months it was not as much of a gamble as for Carrie.

3) Carrie quits her job to move to Paris. She cannot write her column about dating in New York any more and has to give that up with no idea what she will do instead.
I was unemployed in Ireland and struggling to find work in the recession and my chances of finding something were probably slightly improved in Germany where the economy was stronger. So luckily my career has not been affected too much. Though for a lot of expats it can be, especially if they do not have the language. It is worth thinking about before moving over.

4) Carrie loved living in New York. All her friends were there and that was her life. That said, she was excited about the opportunity to move to Paris, and see more of the world.
Well I loved living in Dublin and all my friends and family were there so that was also a difficult decision for me!! At the same time, it can be exciting living somewhere else- visiting new places and meeting people from all sorts of walks of life. People are more likely to regret things they did not do than things they did. Even expats I have met that have made the move but it has failed for whatever reason- for instance they move over for a boyfriend but it does not work out- do not regret the experience and what they have learned from it.

5) Carrie does not have much in common with her Russian boyfriend. He is also a slightly temperamental artist and he leaves her on her own once she moves over and he is not very sympathetic or understanding when she has problems adjusting to her new life or when she is homesick. She is also expected to fit her life around his. He makes very little concessions for her to make the transition easier.
Having a supportive partner is very important for expat couples! My GerMann is very good at listening to me and being understanding when I am feeling homesick or lonely or just complaining about things! That said, we do sometimes bicker about the differences between our countries and which place is better! I think that's normal.

6) Ok one area where Carrie would win is money! When she moved to Paris she stayed in a gorgeous hotel studio room paid for by her wealthy Russian boyfriend. For me the move was without a doubt expensive especially during the first few months. Flights back and forth to Ireland bringing things over, having to sell my car back home as I won't need it any more, supporting myself while looking for work, paying my share of the deposit on our apartment, rent, new furniture etc etc

Overall I concluded that Carrie's trip was destined for disaster whereas my move to Germany is still going reasonably well thank God! I enjoyed the episodes "An American in Paris" which shows what happens when she moves over and the sparkle fades. At first Paris seems very glamours and exciting but soon she starts feeling very lonely as she has not got much of her own life going on there - no friends, no job. She becomes overly reliant on her partner. A lot of expats can relate to this!

There's the scene where she is sitting in the middle of a group of French people speaking French with her boyfriend and she just looks completely lost and left out. I have had similar moments at German parties where I find it difficult to follow the conversation but it normally gets a little better after the first drink! Then my accent improves and I have lots of interesting things to say! Or that's what it feels like anyway.

After living here over a year, I still have moments where I am with a group of Germans and they are chatting quickly and using slang and I can't quite keep up. Talking one-to-one is always much easier! That said, Germans are also normally very happy to speak English if they think you do not understand something. I get the impression that French people prefer to stick with French. They tend to be extremely proud of their language, whereas Germans think nothing is cooler than English!

What Carrie should have done was to try to find other expats to make friends with who would understand what she was going through. She could have searched online for meetups around the area. And attended some French classes- to improve her French and it can also be a good place to meet new people. Once you do get over the initial hurdles, life as an expat gets better I promise!
Posted by dubliner in Deutschland at 2:55 AM