I've another doctor checkup this week. Baby's movements have felt stronger in general. This morning I put my hand on my belly and felt like a ripple underneath like she was moving from one side to the other! According to my pregnancy apps, my doctor appointments should start increasing to every two weeks when it gets closer to the end. I would say that I've been starting to feel a bit heavier and more tired in general. I also find it hard walking as far and tend to get out of breath easier. That said I'm still feeling good in general and enjoying this time.

We are going to order some new furniture for the baby room which should arrive during the Christmas holidays when we are both off. I'm really excited to get organizing the room and sort through all the clothes. Once I know exactly what we have I can see what's left for us to buy. Two of my friends are throwing me a baby shower in January/February. It will be so nice to finally get to have my own baby shower after attending so many and wondering if it would ever be my turn. I think some of the games can be a bit silly but it will be nice to get together with friends and feel the support. I'm going to invite my German mother in law too as I think she would love to be included. She really enjoyed seeing the 3d ultrasound pics from our hospital visit last week. She told me she can't stop looking at them. She's going to be such a sweet Oma (German Granny).

This is a "before" pic of the baby room now. As you can see it's pretty messy! Hopefully in a few weeks I'll be able to post a new pic once the new furniture has arrived and I've sorted through the stuff. We'll probably move that book shelf somewhere, and also change the leopard print duvet cover haha! 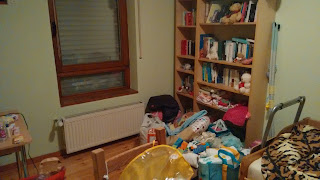 Several people have commented that my pregnancy is going very quickly for them. It's been going fairly quickly for me too actually. Well the first trimester was slow because I was just living from appointment to appointment and nervous but the second trimester has gone fast! And now I'm already in the final stretch.

Friends of us who have IVF twins gave us several boxes of nappies they never used plus various sized baby clothes, some which they had also gotten passed on to them by friends. At this stage our child probably has enough to wear and I don't even need to buy anything else for the first few months! I think it's so nice that friends seem to pass around baby clothes as from what I hear you don't get that much use of of them since kids grow so fast and saves you having to buy too much new. They even gave us two of several items, as they had bought one for each of their daughters!

You might remember I briefly mentioned having a friend who's due about two weeks after me. She's had a very stressful time lately. She caught something called the CMV virus. Many women are already immune to it but around 1% of women who aren't can catch it during pregnancy and then it could potentially cause problems with the baby such as hearing issues (in around 20% of cases)! My friend had to get lots of tests done and it was a very worrying time as you can imagine.

Luckily they were able to determine that the baby was only exposed to it after week 20 and by that stage would have much better odds of having a stronger immune system and being able to fight it. All the scans have looked great. However her baby will need to get a bunch of tests done after birth to check he wasn't affected. I'm not immune to CMV and both our doctors said it would be better for us not to meet up for the remainder of my pregnancy just in case as it's better to avoid taking any risks. It's disappointing as I would have liked to have kept seeing her! But better to be on the safe side. Once are babies are here we'll be able to meet again and in the meantime we've been keeping in touch with whatsapp. I'm also hoping to pass on some of the extra more gender neutral baby stuff to her. 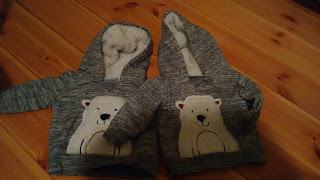 After 28 week check up at doctor

Everything went well at my appointment. On top of measuring any contractions they also monitored the baby's heartbeat this time. I was attached to the machine for about 40 minutes altogether. It took the nurse several minutes to locate the heartbeat at the beginning. I was trying not to worry as I'd already felt plenty of movement that day but it was a little scary all the same. My husband was able to make the appointment this time which was nice. The big news is that the baby is already in position! At the hospital almost two weeks ago she was lying vertically but now her head is down. To me that doesn't seem very comfortable but from what I read because they are surrounded in water it's fine for babies in the womb! There's a good chance she will stay in this position until the birth so it's unlikely I'll be breech which is also great.

I hope everyone is keeping well and enjoying the Christmas season.
Posted by dublinerinDeutschland at 1:58 AM