This week we had the birth course morning where the partners were also invited. It took place on a Sunday and there was heavy snow that day! This time the course instructor didn't try to sell us anything which was good. At the start the men had to introduce themselves and say a bit about what they are hoping to achieve from the course. It was clear most didn't have any idea what to expect. A few said things like Ich lasse mich überraschen. Which is like, "I'm ready to be surprised". 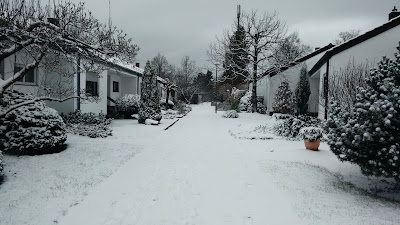 Anyway this time the main focus was the birth which was useful. For first time mothers the instructor suggests you labour around 2-3 hours at home before going to the hospital. For second timers it's better to only wait around 1 hour. This rule doesn't apply if you have any bleeding or your water breaks. And if there is any green in the water then it is a sign the baby is in distress and you should get an ambulance and get to hospital asap. There can be a little spotting a few days before the birth starts apparently which is a sign that you shouldn't venture too far away from home at that stage such as not taking any big trips as the labour could be imminent. She was pretty against epidurals especially ones that you have for a long time as it can cause the baby to sleep and things might stall and then you could end up needing a c-section. The rate of c-sections at the hospitals here are around 20-25% percent. She said that usually c-sections are only suggested if there is risk to the baby or the mother's lives and then they are very important. Though apparently some women in Germany choose elective ones.

The course was particularly useful for the men I found though. It was good for them to hear about how to support their wives during labour. For instance not to keep asking questions but to just be helpful! And instead of saying for instance "you're not doing the breathing right", he should start doing the breathing himself and she will copy. We all practiced the breathing exercises and were given a printout of various positions for the different birth stages. I liked how there was a lot of focus on the women and how the men should be involved and active during the labour. They aren't just taxi drivers bringing their partners to the hospital she pointed out! Hearing about some things that can potentially go wrong during the birth (baby doesn't turn etc) was a bit scary but in general I am still feeling overall positive about the birth. The teacher explained a little about hypnobirth theories and how you have to breath and accept the contractions and not fight against them.

I am a member of two facebook groups for other February Mums to be. One is for Irish women (mainly living in Ireland) and the other is for women who did IVF and infertility treatments beforehand. I've definitely noticed the ladies in the latter group are especially appreciative of their pregnancies. There was a post the other day about how we just can't believe sometimes that this is happening and how grateful and lucky we feel. The other evening I was just relaxing watching tv and suddenly it hit me again that I am, please God, going to get my own baby to keep! I won't have to give her back! It was just a lovely feeling. 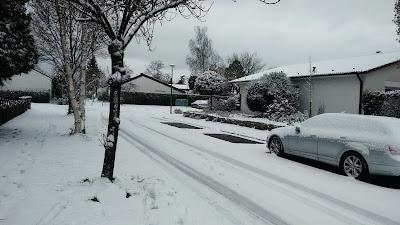 This week was also the third birth preparation class - an evening with just the women. I found it really informative and useful. The course covered a lot about bonding with the baby after birth and breastfeeding. The people in the class are also mixing more now too I've noticed. I suggested we set up a whatsapp group so we could meet up some time and the idea was well received. It would be a good way for me to keep up my German language skills while I'm on my parental leave.

In Germany the period after birth is known as Wochenbett (lying in/confinement). For the first six to eight weeks the mothers are encouraged to stay in bed and just focus on breastfeeding, resting and bonding with the baby while everyone else brings food and looks after them. That sounds nice! I normally get bored of lying in bed for ages though so provided I'm feeling ok I think I would try to get out for walks now and then if I can. I'll play it by ear though. Staying at home and having that time to bond with the baby also sounds lovely.

To be honest I still worry and get anxious sometimes. I read a really sad story recently about an Irish woman who had a stillborn baby at 35 weeks. And on facebook a group called "stillborn angels" popped up on the suggested groups for me! I had to keep reminding myself it was just because of some stupid programming algorithm and not a bad sign or omen. I've even looked up where Germany stands in terms of stillbirth compared to other countries. It's about 2.4 births per 1000 which is a fairly low number (though ideally there would be none at all of course). However it happened to one of my best friends in Ireland so I definitely am aware that is is more common than you might think. It's just devastating for anyone to go through. I am trying to calm myself by reminding myself that the majority of babies do arrive safely. It will be a relief though once our baby is here and everything is ok. My friends have told me that being a parent means a lot of extra worry that never really ends!

Still though, apart from occasionally being anxious about things like that, in general I am feeling good and positive. I hope everyone reading this has a lovely Christmas period and "ein guten Rutsch", a good slide into the New Year, as the Germans would say!
Posted by dublinerinDeutschland at 9:19 AM