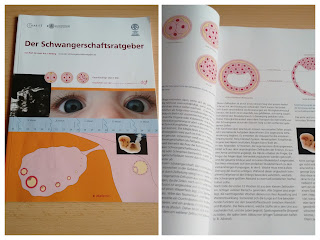 Things have been a little up and down since our first appointment where we saw the heartbeat. Mainly great but I've also had some very anxious moments.

Dr. Peppy, the doctor at our fertility clinic gave me a plan for how to taper off Prednisolone the steroids I've been taking. It was quite a steep drop. I was to go from 15mg a day to 10mg then three days later drop again to 5mg then three days later to 2.5mg and then stop completely. I reduced the first amount from 15mg to 10mg but then I noticed my glands were slightly swollen and I wondered whether it might be a side effect. I also started to get nervous about going off the steroids so soon. I did some research online and most women who take prednisolone to reduce inflammation stay on them till the twelfth week of pregnancy before then gradually tapering off.

So I decided it best to phone the immune doctor to confirm with her. The treatment plan I had been given just said to reduce once the heartbeat was established but it was vague. When I phoned and explained the situation the lady at the practice seemed alarmed and said I shouldn't have reduced already, that it was too soon! She said that she would get the doctor to email me to tell me what to do. Obviously that phone call worried me! I decided to not reduce any further and to stay on 10mg until I heard from the doctor. It took several anxiety filled days before I got an email from the immune clinic. The email emphasised again that it had been too soon to go down without having my natural killer cell level activity rechecked. I was asked whether I wanted another treatment plan sent out to which I immediately replied in the affirmative. I was freaking out after the email though. Really worried that I might have ruined everything. My sister had also told me all about a friend of hers who had had a traumatic missed miscarriage at 10 weeks recently and I couldn't stop thinking about it which probably didn't help my worries.

Hubby thought we should trust dr. Peppy. Another friend I asked thought I should listen to the immune doc who is the expert in the area. Hubby offered to phone the practice to discuss what I should do. I thought that would be a good idea because I didn't want anything to be lost in translation (remember all the communication had been in German)! The email had come across as very harsh! But then things in German can often come across that way to non native speakers. Anyway hubby phoned and discussed my treatment with the doctor - He said that the fact that I reduced the prednisolone wasn't that bad, the issue was that I had gone down too severely, I should have only reduced by 2.5mg amounts not 5mg. The new plan was that I stay on 10mg for another two weeks (till week 10) and then in one week intervals start to go down by 2.5mg.

I am also able to reduce the Granocyte injections from every third day to every four for two weeks then every five days. I felt very relieved after that phone call! That said I was still nervous for the eight week scan. This time the appointment was done at my local gyno. It went great thank God! The baby is actually starting to look like a tiny person now, not just a dot! It was really incredible to see the head and tiny hands. Everything looked perfect. The doctor also gave me a book about pregnancy. Afterwards I got another Intralipid infusion done.

The only bad thing was that my doctor was pretty against flying at all during pregnancy. He said it increases the risk of thrombosis and miscarriage slightly so we would be taking a risk travelling to Dublin for my brother's wedding. Hubby and I did discuss whether we should cancel the trip but I really wanted to go. Also lots of people have flown pregnant and been ok so I felt like it should be fine. That doesn't mean I wasn't anxious though! I avoided the x-ray machines in the airport and even wore a "belly band" which is meant to protect against radiation which I'd ordered online! We had a great time, it was so nice seeing everyone. I even told a few friends and an aunt who had been praying for us and knew about our struggles our "news" in person, which was lovely. Everyone has been extremely happy for us. It still all feels surreal though to be honest! I wonder when it will actually feel more real. Part of me is scared at times to enjoy it too much in case I jinx it, but then the other part wants to enjoy every second!

I noticed a few more "symptoms" kicked in since week eight. If I let myself get too hungry I will start to feel quite nauseous. My sense of smell is sharper. I've also been feeling more tired and I've been more forgetful too! After the Ireland trip, I felt exhausted. Work was quite stressful too for various reasons. Then a few days later for the first time in this pregnancy I had some red spotting. It happened late at night. It reminded me of the awful miscarriage I had after our first IVF and for several seconds I just thought "Oh no, no, no..." However it was only a small amount of bleeding and it stopped soon after thankfully. I found it hard to sleep that night and kept wondering what I should do - go to the hospital, phone my gyno in the morning or do nothing and assume everything is fine. In the end I decided to call my doctor first thing. When I phoned and explained about the small amount of bleeding (but no cramps) I was told to make my way there immediately. That was quite nerve wracking as you can imagine! It was a different doctor this time but she was very nice. She checked my cervix which was closed and the right length, and she couldn't locate the source of the bleeding. She said that some spotting can be normal in the first trimester. Then she did a scan to check on the baby.

At first it just looked like a blob this time! I couldn't make out where the head was. She said the baby was in a funny position with his/her head leaning over the body looking at the feet. We both stared at the screen and there was no sign of a heartbeat at first. It seemed like it took forever while the doctor kept moving the ultrasound wand around. I was thinking something like "Oh God, oh God, please can the baby be ok". After what felt like an eternity but was probably only a minute, she found the heartbeat and everything was fine! She did comment that the baby was "small". I didn't like the sound of that. It took ages to get a measurement because of the awkward position but it looked like baby is about a week behind in growth. The doctor said not to worry though. She also wrote me off sick for several days and told me to rest at home and take magnesium. If I have any more bleeding or get cramps outside their practice opening hours then I should go straight to the hospital.

Luckily everything has been fine since then. I've just been taking it very easy. Watching lots of The Good Wife again! I go back for another scan early next week. Hopefully the baby will have grown more by then. I'm trying not to worry about the growth thing. I read on online forums that it's normal enough in the first trimester for the baby to measure a week ahead or behind. I also think that the baby's awkward position could have messed up the measurement. So that's a run down on the last few weeks! Only a few more to get through until, please God, I'll make it safely into the second trimester.
Posted by dublinerinDeutschland at 9:30 AM