Well I gave an update on our new house a few weeks ago, maybe it's time to give an update on project "maybe baby" which is what I've nicknamed our journey to hopefully start a family on this blog. Several weeks ago after our second IVF cycle failed we decided to do extensive blood testing to see if there might be a reason for the two early miscarriages after a suggestion from our doctor. It took a few weeks to get things clarified with our health insurances but they agreed to contribute towards the costs (so we will only be charged a few hundred euros as opposed to a few thousand!). It ended up being about twelve vials of blood from me and about eight from the hubby. Timing wise since I knew we would be busy with the house, I liked the idea of getting the blood testing done since it can take about two months anyway.

So far we have only gotten some partial results back. Both our chromosome blood tests came back fine and it also showed that I don't have a blood clotting disorder. It's nice to be able to rule those issues out. The rest of the results will probably take another few weeks. I'll be tested for the MTHFR gene mutation which is where your body doesn't absorb folic acid properly unless it's in folate form and has been linked to miscarriages. And natural killer cells which your body produces to get rid off any foreign bodies like diseases but the theory is that in some women the antibodies work too well and can kill a growing fetus. There is treatment you can get apparently to help fight this problem. Hubby and I will also be checked for some vitamin and mineral levels. For instance I've read if you have a B12 deficiency it can cause infertility and miscarriages! Since I'm lactose intolerant and don't eat so much dairy and I'm also not a big meat eater then it is possible that my values are low.

Once we find out our test results we will be able to plan plan when to do IVF again, ideally before the end of this year. It's not that easy to plan though as over the next several months there'll be Christmas and several weddings of family and close friends that we would ideally like to travel back to Ireland for. During IVF I wouldn't be able to fly and afterwards if I get pregnant I would also be too nervous to fly in the first trimester. I suppose I should cross that bridge and figure that out *if* I manage to get pregnant. If that were to happen I would be so happy. I love travelling though and I already often feel like I miss out on so many big moments back in Ireland by living here in Germany so I would love to go back for the weddings, especially my brother's next Summer. It's less than a two hour flight to Ireland but apaprently IVF pregnancies are considered high risk.

We'll know more in a few weeks. If the blood tests come back with no issues then we could plan round three IVF quite soon but if there are any problems discovered then we would have to wait several months anyway probably to get treatment. So it's all quite up in the air still. I feel ready enough for the physical side of it all, the injections, egg retrieval etc, but I do worry about the emotional side which I always find really hard going. Especially if it were to fail again. 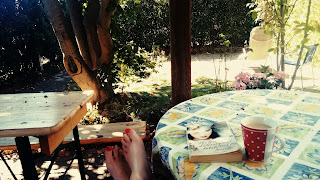 Having the house has been a great distraction for sure. We love the new place and are settling in well. We still have loads of boxes to unpack and lots of stuff to get done but we've been able to enjoy German Summer in our new garden now and then which has been great.
Posted by dublinerinDeutschland at 1:44 PM