At the start of week 33 I had another doctor's appointment. It had been a month since the previous one and from this point on they will be every two weeks. Hubby was able to come with me which was nice. It was pretty much the usual. I arrive, check in, am told to go hand in a pee sample, then wait to be called. After which I go into a room where the nurse weighs me and then they use the CTG machine to measure any contractions and check the heartbeat. My blood pressure is also checked and they usually take blood to check for toxmoposis. That takes around 40 mins altogether. Then I go back to wait until the doctor is ready. 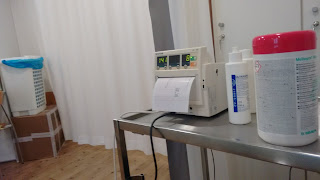 One of the women from my birth preparation course was in the waiting room this time and I started chatting to her. She's really nice. Her baby is due three weeks before mine. I'm definitely going to try to arrange a meetup with the women from my group. I think I mentioned before I could do with more german friends plus it would be nice to have people to meet with babies around the same age. Hopefully we'll get on well and have things in common. She's planning to give birth at the same hospital as me too and already registered there. She told me how friendly the staff were.

Once we were called in to the doctor, we had a chat with him about how I'm doing. He told me that there won't be any more ultrasounds at this stage! Unless I want to pay extra for one. I discussed it with hubby and we decided that it's ok, we can probably do without any more. I felt a little sad for a moment but I think I can wait now to meet the baby in real life! The doctor checked my cervix which is still closed and commented that he could feel the baby's head! She's still in the birth position which is a relief.

I asked whether he had any indication whether the baby might arrive early or on time or late but he laughed and explained how there is no way of knowing. He's had women come in with a closed cervix and the baby far up in the uterus who have gone into labour two hours later and others with already opening cervixes who still take a few more weeks. I tend to be the sort of person who likes to plan everything and know what I'm doing so the thought of having no idea when the baby will arrive is somewhat strange and a little unnerving! I'll just try to get as much done as possible over the next few weeks just in case. Hubby and I went for a nice lunch date together after our appointment at a local hamburger place. 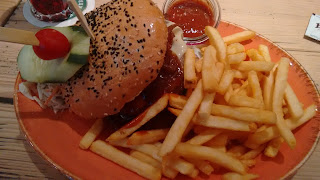 I also finished up at work at the end of week 33. In Germany maternity leave starts 6 weeks before your due date. I've a long list of things I'd like to accomplish during the time but we'll see how many things I get too! It felt quite surreal going into to work on my last day knowing I wouldn't be back for around half a year. I was quite busy the last few days finishing up things and doing a handover so I ended up working late. The time really flew the last few weeks.

Well my first week of maternity leave has been nice! I've kept busy. I met up with friends a few times, sorted through a bunch of baby stuff so that now the nursery is coming along, caught up on my reading, started getting my hospital bag ready (still need to wash and pack a few more things but it's more or less done), and spent time with hubby. I even cooked pumpkin risotto and froze a bunch of leftovers. I haven't been productive every day though! I have a long to do list and a whole bunch of things I'd like to get done but there has been days when I'm just too tired and then I've just taken it easy. I am trying to get to as much as possible ideally at the start of my maternity leave when I have a little energy and then towards the end I can focus more on resting and preparing for the birth. Of course I've no idea when the actual birth might be, whether she will arrive early, on time or late!

My Dad and sister are so excited they already booked their flights over in March to visit. They are due to come around 8 days after my due date. I'm a little worried that the baby might end up being overdue as that would be disappointing if they arrived and I was still pregnant and waiting! However the other weekends in March didn't suit them as much and they know the risks I guess. Most likely though the baby won't go more than a week overdue.. I think. In Germany they induce you if you go ten days over your expected date.

I'm still feeling pretty good in general. More tired which is to be expected and I'm not as mobile anymore. Sometimes my hips hurt when I walk around. I went for a pregnancy massage, this time to a different place recommend by a friend and it was really good. Some parts hurt when the masseuse was trying to get rid of shoulder tension for instance but it was also really nice and relaxing. I'll try to go again. I've been considering getting acupuncture as it's meant to help with the labour pain but my experiences with acupuncture in the past haven't been great so I'm not sure if it's for me or not! They have pregnancy gymnastics and meditation at the center where my Hebamme (midwife/doula) works and I would like to try it out but this past week I was just too lazy! 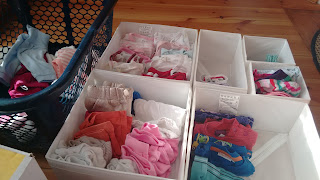 I attempted to organize a meetup with the girls from my birth preperation group. Only one girl responded which was disappointing. However in the end I met up with her, as well as two others from the group who don't have whatsapp so I sent an old fashioned SMS too and the four of us ended up having a really nice lunch. We are all due within about two weeks of each other. It's a good way for me to practice my German too! We got on well and they all thanked me for arranging it. I even opened up to them about our struggles to have a baby and IVF. I had to explain what's involved in IVF as they didn't really know. They were all really supportive and delighted for us that it worked. One of the girls is older and said she had been considering going to the clinic to get checked out however then it happened for them eventually without needing to but she said it's very common these days for couples to need help. Don't I know it! There's a whole world of couples out there struggling trying to build a family, and I also know it often doesn't work out sadly for various reasons.

I'm still enjoying being pregnant and loving feeling the movement. In terms of symptoms I notice my hips hurt sometimes when I walk, I get heartburn on and off still and it can be quite bad and I wake up around 1-3 times in the night to pee. But really nothing so bad and I am grateful that I'm still feeling relatively good! It's strange having all this time off. On the one hand I have a list of things I could be doing and each day I wonder how productive I should be but on the other hand it's so nice to have the time to relax and just catch up on my reading! I'm doing a mixture I would say. When I have bursts of energy I try to take advantage of it by meeting up with people or catching up on housework, preparing the baby room etc and when I am tired then I give into it and relax! I've been watching lots of Pretty Little Liars on netflix. I used to think it was a very teen centered show and wasn't so into it the first one or two seasons but then I started to really enjoy it. At this stage our baby will probably recognize the opening music haha!

This has been a nice week. We got a new changing table from IKEA and it's all set up now. I never thought I would be so excited about a changing table! The room is coming together really nicely. Since a lot of progress has been made recently I don't feel that same stress that things won't be ready in time. I have a bunch more clothes to sort through but overall the room is more or less almost set up at this stage. 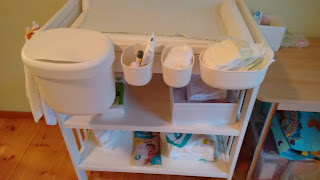 We are buying a co-sleeper bed from friends. Just like any baby product I've heard some mixed things. People have mainly been positive about it though one or two have said that their baby didn't like being even as far away as that and wanted to sleep right next to them. Or some babies outgrew it by around nine months instead of 18 months like it says on the website of the brand we are going for. I think it can depend on how fast your baby grows and whether they start to crawl around a lot or stay in the co-sleeper at night. We've been having trouble making our minds up about what sort of buggy to get. We have a whole selection of babywearing carriers now which we are hoping to mainly use, if the baby likes them that is. So we might not even need to use a buggy that much at the beginning. Or maybe it would be handy to have one for walks and for day time naps.