I almost can't believe I've made it to 30 weeks! There are only about ten weeks left till we meet our little one. I've been enjoying the buildup to Christmas. I put up our tree the first day of December already and hubby and I often play Christmas songs at home. This year my family did Secret santa, so we instead of having to buy for loads of different people we would all just have to focus on one person with one bigger gift. That made things a lot easier. We've gotten the presents for hubby's side too so I'm feeling fairly organized.I sent out my first batch of Christmas cards but I still have a bunch more to send. 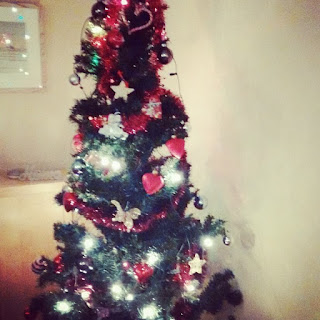 We'll be spending this Christmas with my husband's side. It's always different being away from your own family at Christmas time and experiencing different traditions but it should still be a lovely time. I've only a few more weeks of work left until my maternity leave starts!

This week we had our final birth preparation course day. It was good. Newborn care was the focus. Such as how to bathe the babies, baby wearing, more about breastfeeding etc. At the end of the course I got some of the girls numbers and said I'd set up a whatsapp group so we can meet up sometime.

My appetite has definitely increased lately! I went out for lunch on Saturday with friends and ordered a lasagna, realised after I was still starving then ordered a large starter of bruschetta! The next morning I woke up at five am feeling hungry and couldn't get back to sleep so got up and had some porridge after which I managed to sleep a few more hours. Baby must be going through a growth spurt. My bump is definitely much bigger but it is still small in general for 7 months. A few people have commented. At my last doctor's appointment he noticed my iron count is low so I've been trying to eat more iron rich foods.

This week is Christmas and my birthday. Last year we had a lovely Christmas with my family but it was still tinged with sadness wondering if we would ever be able to have children. I was in the middle of the two week wait after our third IVF cycle which ultimately failed. I remember testing on Stephen's day morning thinking for sure it would be positive and the horrible feeling of shock and sadness when it wasn't. It was a hard way to start into 2017. It is so different to how things are now with our baby on board and feeling hopeful.

I often think of all the couples who are still in the trenches and finding this time of year particularly hard. Christmas can be very kid centered! It can also be very hard when you have lost loved ones. It was just before Christmas that my Mum lost her battle with cancer years ago and so it can bring up a lot of hard memories. I also have been thinking recently how sad it is that she won't get to meet her grandchild. I just hope she is in heaven living on in some way. I think I have to believe that. 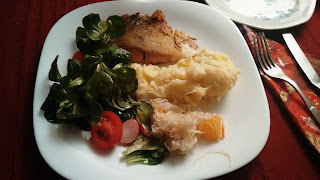 We had a nice Christmas with my husband's family this year. There isn't enough room at his parent's place and we just found it easier to stay at a hotel in town for a few nights but that worked out well. It was a lovely few days. Lots of eating! My mother in law served fish with Sauerkraut on the 24th and on the 25th we had roast duck. They don't traditionally eat turkey for Christmas like we would in Ireland. We also caught up with one of my husband's friends from his hometown which was fun. 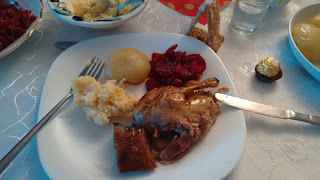 I also had my 36th birthday! It was a quiet one, but there was yummy chocolate cake. Of course it felt special to be pregnant on my birthday after hoping and praying for so long for this. Hubby bought me a pretty rose gold bracelet and necklace with butterflies.

Both my husband and I had some time off the days after Christmas and around New Year's. We met up with some friends but also spent a lot of time hanging out just the two of us and relaxing. Sometimes we'd stay in our pajamas till late morning when we didn't have anywhere to be. I bought Inda May's Childbirth book and I'm finding it really good so far. It's full of positive tales of how birth can be and it's nice to fill my head with those sort of stories to help me feel less nervous about the birth.

I've noticed a lot more aches and pains in general now. It's getting harder to move around and I'm much slower walking. I'm going to try to keep up going for walks when I can even if they are short and maybe go swimming a few times once I'm on my maternity leave. I also find I often wake up once or twice in the night to pee now. In general I feel more tired and get exhausted more easily, however I also have these random bursts of energy and then just feel really motivated to get stuff done! Hubby and I spent two days organizing things around the house and that felt great. Maybe it's "nesting", haha! I wish I had taken before and after pictures but we made some good progress clearing out one of the rooms in our basement.

New Year's Eve we just had a quiet evening for two! I had said to hubby that probably in the future it will be hard to go out on new year's eve with a child so now is our chance to do something if we want but he prefered to just spend it at home. Part of me felt a little like maybe we should be doing something, like going out for dinner at least but I was also happier just staying in! We made a yummy mushroom, corn and tomato cheesy pizza together, drank alcohol free prosecco and then watched the neighbourhood fireworks.

I only have one more week to work before my maternity leave starts. In Germany it's six weeks before the birth. To be honest I feel ready to stop. Although the idea of not being in the office for so long is a strange one! I'm looking forward to this time to get as much ready for the baby as possible and also catch up with friends and have time to relax. I've always been the sort of person who likes to plan things and know what I'm doing. So it seems strange to me the idea that the baby could choose to come at any moment! I hope she will stay in there until at least week 36 which is considered full term anyway but also ideally not go too far overdue past 40 weeks. I started packing my hospital bag already just in case.

One day of the Christmas holidays when we were over with my husband's family I thought I hadn't felt the baby move so much that day and started to get a little nervous. But then later that evening I felt her as usual and since then a lot. I think I'm getting used to the movement patterns. Like mornings and when I'm lying in bed I'll feel lots of kicks and often in the evenings watching tv. Or whenever I haven't moved around for awhile. She gets hiccups a lot too which is funny!

Sometimes I am reminded that this could very likely be the last time I am pregnant (since it was so hard to get to this stage in the first place and hubby and I have decided we wouldn't want to go through IVF again), and then I feel like I don't want this time to end and I'm in no rush! But at other moments I feel ready and excited to finally meet our little one. I have another doctor's appointment this week and then from now on it'll be every two weeks!

I'm a bit late posting this but Happy New Year to you all!
Posted by dubliner in Deutschland at 2:40 AM