Gearing up for round 4


It was touch and go whether my uterine biopsy results would arrive in time for me to start our next round of IVF. I provisionally made an appointment for early this week and we had left it that I would call that morning to see if the results had arrived in time and presumably if they hadn't I'd need to postpone treatment for another month or two. Although if they showed that I had an infection (Endometritis) then I'd need antibiotics for several weeks and have to postpone anyway. 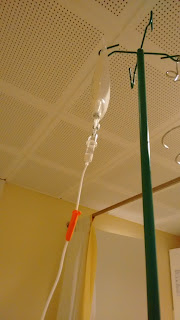 Both the GerMann and my sister were thinking it would be good if I had Endometritis since it would mean something to treat and a reason IVF hasn't worked until now. Personally I was hoping I wouldn't have it, as I don't particularly want to find another issue potentially wrong. It's already a hassle having all the immune problems.

Dr. Peppy (my nickname for her) had emailed me a few days before my appointment saying that my results arrived and they were "unauffällig" (unremarkable) so nothing stands in my our way now. She sounded excited in her email which was sweet! I was also happy as initially the clinic had phoned hubby to say the results were there but they wouldn't discuss them on the phone which led me to start worrying that maybe they were bad and the doctor wanted to tell me in person!

Several things happened at my appointment this week.


So that's where I'm at. I feel a little overwhelmed about going through it all again. Scared too. The only part I'm actually looking forward to is the transfer. I like my doctor though and trust her. I'll know more in a week whether I'm starting or not.

Posted by dublinerinDeutschland at 11:45 AM