If you've been following our 'maybe baby' journey you might recall that I'd nicknamed our old doctor "Dr. Direct" due to his straight talking attitude. "Dr. Gentle" is the second doctor at the clinic who we only occasionally saw but seemed to have more empathy and was softly spoken. The first nickname that came to me about our doctor at the new fertility center was "Dr. Peppy"! She just seemed full of energy. Hubby commented afterwards she's probably a type A personality. She was nice and made a good impression. I think it will be easier if I use bullet points to sum up some of the main things from our appointment; 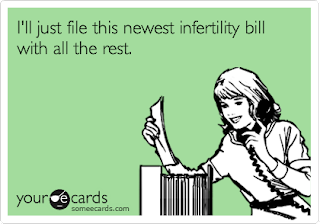 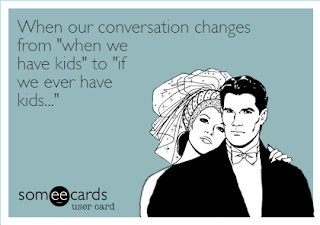 Overall the appointment went well. That said, I left feeling very overwhelmed about it all and needed a day to get my thoughts straight. Hubby was a bit cynical saying of course they say we should do another round with them as they want the money and didn't feel convinced that anyone in the industry gives you unbiased advice. We had some differences of opinion on how to proceed but we are on the same page now. We've both agreed that we'll go for a fourth (and final IVF) at this new clinic.

I spent a few hours reading up about DHEA supplements and ended up totally confused about whether they would help me or not! On the one hand some studies have shown very positive effects for poor responders who take them. However I've also read studies disputing that. Some women on message boards talk about how they had much better IVF results after taking DHEA but then I read others saying it messed up their IVF and it was a wasted cycle! On top of that it can affect your thyroid and immune system apparently which concerns me since I already have immune and thyroid issues. I'm still on the fence. Melatonin has shown some promising results.

Something I did decide to order is Serrapetase. It's an enzyme found in silkworms and it's meant to dissolve old tissue in your body so it has even helped some women unblock their fallopian tubes and get rid of adhesions apparently! The doctor hadn't heard of it and it hasn't been clinically proven but I read through hundreds of reviews from people who bought the tablets and the majority were very positive. A few did mention it caused stomach upset so hopefully I won't be one of the unlucky ones with bad side effects. I've figured it's worth a try.

I an feeling quite overwhelmed at the thought of going through IVF again. I'm painfully well aware that just because we are trying a new protocol there is no guarantee that my body will respond better to it and grow more eggs so that's a concern! During the second round of IVF the doctor tried me on new meds and I only ended up getting one egg at the retrieval, my worst round. It was incredibly disappointing really. I've read online that poor responders generally have worse success rates than average. Even if I do get pregnant I'm anxious about having a another miscarriage. Hubby also commented that we could go through so much only to find out that something is wrong with the baby. It probably sounds like these are all very negative thoughts but I think we are just being realistic at this stage. We could be one of those couples that IVF just doesn't work for.

All that said, I am still hopeful. Sometimes I allow myself to fantasize about what it would be like to go to the doctor for a pregnancy ultrasound with my husband and see our baby moving around on screen, or how wonderful it would be to have our baby or babies growing inside me for nine months. I also imagine how amazing it would be having our child actually here with us! I'd love to bring him/her to trips to Ireland with me and there are so many people among our family and friends who would also have so much love for our potential offspring. I still hope and pray that this is something we will get to experience. However if it doesn't work out this Summer with our fourth IVF attempt, at least we'll know we gave it our best shot and be able to move forward without regrets.
Posted by dubliner in Deutschland at 10:48 AM