On your bike #MicroblogMonday 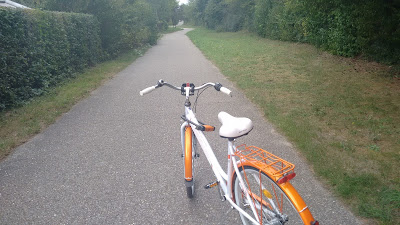 If you live in Germany, you really have to get yourself a bike. I bought one in Penny, a discount supermarket, shortly after arriving here. It was a city bike and lasted for about five years until it started causing problems - gears not working properly and then the pedals looking like they might fall off!

When I brought it to the bike shop to fix, they said it would cost about 150€ to fix all the various things wrong with it and it just wasn't worth repairing since second hand it would probably only cost 50€ to buy.

So I decided it was time for a new bike. That decision was more complicated than I realised. Do I want a rally, mountain or city bike? How many gears? What size frame? And then whether I should buy it from a discount supermarket again or go to a fancy bike shop this time and spend more money on it. The general consensus among my German friends is that you should spend at least 800€ to get a decent bike. However then you also have to worry that it might get stolen so you also need to fork out for an expensive lock or two and probably invest in bike insurance as well.

In the end I decided to go for another discount bike from a department store and found a nice one for under 300€. The deciding factor? I loved the colour, as you can see it's bright orange. At least if it does get stolen, it will be easy to spot!
Posted by dublinerinDeutschland at 12:22 PM