We're not joined at the hip, you know!

Arriving at my gym the other night, I was immediately asked "Wo ist Ihr Mann?" (where is your husband?). The question took me by surprise. I would have liked to have answered something along the lines of; "we're not joined at the hip, you know!" but I couldn't figure out how to say something like that in German quickly enough so I just mumbled something about him having to work.

It struck me as an odd question. I know that we often go to the gym together when it works out with our schedules but we're capable of going there without each other! When I mentioned it to the GerMann later he said he often gets asked at the gym where his wife is when I'm not there! We're not the kind of couple that feels like we have to do everything together. We both enjoy our independence and have our own friends and interests. I also think it's good for the relationship. That way you have more stuff to talk about when you do spend time together and a little absence now and then makes the heart grow fonder!

I couldn't help being reminded of a time in the late 90s when I ended up being on the same flight as Andrea Corr, from the well known Irish folk music group, The Corrs. We got talking on the shuttle bus from the plane to the airport and were having a lovely chat until I made the silly faux pax of inquiring where the rest of The Coors were. I'm pretty sure I didn't even mention them by name! The question naturally didn't go down well and she answered a little frostily, "we're not joined at the hip, you know." Whoops! 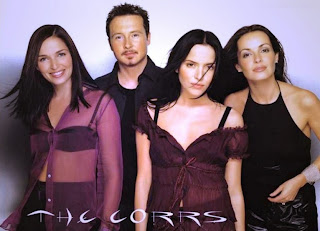 I totally get it though. if I were her and being constantly asked where the rest of the group are whenever I actually ventured out alone, it would bug the hell out of me too!

Anyone else have any awkward celebrity encounters? Do you spend lots of time with your significant other or also enjoy time doing your own thing?
Posted by dubliner in Deutschland at 12:44 PM