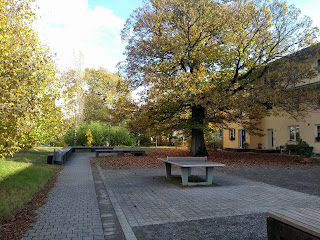 Inspired by Greta Thurnberg and also wanting to reduce my carbon footprint, this is what we have been doing.

Reducing flights
We plan to only fly to Ireland at most twice a year instead of three or even four times. Ideally we would aim to stay there longer each time to make the most of our visit. Flying is one of the worst things you can do for your carbon footprint but as an Irish person living in Germany, of course this one is difficult for me! I make the most of Skype and Whatsapp for keeping in touch but spending time in person is always the ideal.

We plan to also cut back on holidays abroad in general. Honestly I love travelling so this sounds hard initially. However living in Europe is a great base for visiting other places and we should still be able to plan some fun trips by train/car.

Cutting back on the amount of new clothes we buy
Ok, to be honest ever since having my daughter I've mainly been too busy to find time to shop like I used to. But the fact is I realised I already own plenty of clothes. I saw a video about how many fabrics and shoes can end up in landfill and it made an impact on me. I'm planing on organizing a clothes swap party with a bunch of people here which seems like a great idea!  I rarely buy new clothes for Mini either, instead getting lots of second hands things from other people who don't need them anymore. It was often only a matter of asking around. There are also many flea markets in Germany worth checking out.

We have been making an effort to reduce plastic waste
We don't use plastic straws. When we go shopping we always bring our own reusable bags. Some supermarkets here are also including a section where you can bring your own jar for dry foods like nuts and pasta. We also don't own a car, mainly using public transport or cycling (and occasionally doing car sharing).

I'm aware there's probably a lot more we could be doing as a family but it's a start! I am continually on the lookout for other ideas for little changes we could do that would make a difference.
Posted by dublinerinDeutschland at 10:00 AM