A half a year old

And just like that my daughter turned six months old. It's a fun age! I love watching her discovering the world and learning new things each day. She's grown so much the past few months. People often comment on the difference.

When she was 25 weeks, around a week before she turned 6 months we started with solids. I guess I was too impatient to wait one more week! We have started VERY slowly though. The first day we cooked and pureed some carrots and potato. My husband tried spoon feeding her but she grabbed the spoon off him to play with it instead! She made some funny faces but I think she liked it. There was such a mess afterwards, food all over her face, even in her hair. I'm not sure whether she actually ate any of it! Over the next few days we tried giving her carrots & potatoes again then a little pumpkin. She seems to enjoy trying new foods. At most she eats around 4-5 spoonfuls. Maybe after a month once she is eating well, we would probably try to introduce a second meal such as porridge with fruit.

Mini enjoyed avocado mixed with banana the most I'd say. Apple was also a hit. I've bought some baby jars of meat to try this week. We are doing traditional weaning. I had considered Baby Led Weaning but my husband wasn't keen on the idea as he was too nervous of the choking risk and so we decided to stick with the standard format for now. In fact, being Germany, of course there are certain rules and structure to how to do it!

First you start with "Brei" which is pureed vegetable. You are meant to introduce one vegetable at a time, usually carrot. Then the next step is to try that vegetable with potato. Once the baby is eating that well, then you can start giving pureed vegetable, potato and meat. You are allowed to exchange the potatoe with some other grain which is gluten free such as millet. They recommend meat is given five days a week although one of those days you may replace the meat with fish.

Step two is you introduce a second meal of baby porridge with milk and fruit. Also a gradual process. Ideally by around 8-10 months the baby will be eating three meals a day. We had a talk at one of my German baby groups on traditional weaning by a nutritionist. I asked whether you could give avocado instead of carrots. The answer I got was that Germany already has such great vegetables such as carrots and turnips that there is no need for fancy exotic stuff like avocados! When I asked whether we could use olive oil instead of the recommended rapeseed oil the answer was also along the lines of "this is how we do it in Germany". So that's that!

Apart from the solids, Mini is still being breastfed as usual on demand. It's going so well, I don't see any reason to stop. I am delighted to have made it this far despite a rocky start! 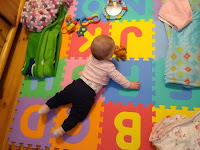 At this age babies have longer "wake times" and now want to be entertained! Sometimes I get the impression Mini gets bored of staying at home and enjoys herself more when I take her out with me to meet other babies or go for walks. People smile at her and she smiles back! It's nice to meet up with friends at the park, put some blankets down in the shade and let the babies roll around and play with their toys while we chat. Until the babies get overtired and need to nap that is!

When she was around four months Mini rolled over twice from her back to her front but she hasn't done it since. She used to hate tummy time and would only tolerate it for a few minutes. I started to worry she wasn't keeping up with the other babies since others can roll and some can even crawl already at this age but I read that each baby focuses their attention on different skills at a time. Maybe she is concentrating on her vocal skills. She started off making a lot of vowel noises and now it sound like she has moved onto consonant sounds. She makes "mmm" noises almost as if she is trying to say "mama". I know that will be such an emotional moment for me once she actually says it. I have been trying to do a little baby sign language with her too.

Mini rolls onto her side and back and tries to grab and eat anything in sight. She can even sit now for several seconds on her own, but I just have to be ready to catch her when she falls as she's a bit wobbly still. One of the sweetest things is her laugh. Occasionally one of us can make her chuckle! For instance one time when I pretended to sneeze or by playing peek a boo. She's generally good humoured and lots of people have commented on what a happy baby she is which makes me feel like we must be doing something right! 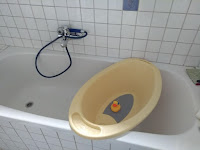 Sigh. The sleeping is still bad. Well the main problem is the very frequent night time wake ups. I've tried a whole bunch of tips I've read about and sometimes it seems like things are improving but really it's a mixture of good and bad nights no matter what I do. Currently we are going through Leap 5 which is notorious for bad sleep. Maybe things will get a bit better once that's over. On a good night she "only" wakes around three or four times. On a bad night up to ten! At some point I lose count.

I've also been suffering from insomnia lately which has been hard. I'll finally get Mini to sleep or back to sleep and then I lie there unable to switch off myself. It can be really frustrating. I just hope the sleeping situation improves by the time I go back to work as I am worried about how I'll be able to function with so little sleep in the office. Having lots of chocolate and tea during the day has been helping me cope!

We can still only get her to nap in our arms, or in the baby wearing carrier. We haven't tried in the buggy recently as it was hit and miss anyway and lately she doesn't like to be in it for that long. A few times I have tried putting her down into her cot once she falls asleep but she always seems to wake up and cry and then I feel guilty for even trying when she's not ready yet. One thing that I started doing since around four months though is for one of her naps, usually the morning one, I'll bring her back into the bedroom with the blinds down and white noise on. I then nurse her to sleep and I also rest beside her. In theory I could try to roll away at that stage and go do something else but I'm often tired myself so often use the time to nap aswell or just relax and look at my phone.

Yesterday morning I was lying with her for her morning nap and thinking how lovely it was. I was on my side curled around her and she was lying facing me with her little hand on my arm. It was around 10am and it suddenly occurred to me that once I'm back at work in just two months time that at 10 am I would of course be in the office already and I would miss out on sweet moments like these. It made me feel a little sad then and it was a reminder to enjoy this time while my baby is so young and still needs me so much!


My husband had some time off recently and it's been lovely being able to spend time together as a family. We took Mini to baby swimming for the first time. She seemed to enjoy it! She loves bath time too. Maybe because it reminds her of her water birth! The weather has been nice and I've been to the park and zoo with her several times. She's not particularly interested in the animals yet but it's still a nice place to walk around and lots for her to see. A few weeks we attended our second wedding with Mini. We ended up leaving around the same time as my sister's one, 10.30pm, but up until then she was managing great! Soon we are going on a trip to Ireland and I am really excited to introduce her to my friends and to spend time with my family again.
Posted by dubliner in Deutschland at 9:34 AM