How we've ended up attachment parenting


There's this new Netflix comedy series called The Let Down. It centers around a new mother of a two month old living in Australia. She's not coping that well. Her husband is busy with work, she has little support, her old work friends don't want to hang out with her anymore and her baby won't sleep! She joins a parenting group and makes some friends that way and the show is about her and the other families. It was really funny and relatable!

The reason I'm mentioning it, is that there's this one scene where she goes to a bookstore to buy a book on sleep training. She talks to the guy working there and says she's looking for a recommendation. He then asks what her parenting style is. She doesn't know and he starts listing the different types. Attachment, French, gentle, helicopter etc etc...it's a long list and she is left more baffeld than ever! 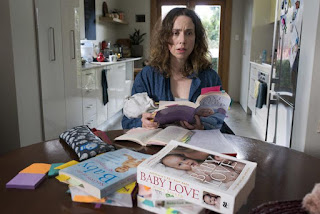 My impression is that there are two main types of parenting styles. Parent or baby led. It's really about whatever works for each family.

Parent led is where the baby should ideally fit in somewhat with their lives. The mother may only have a short maternity leave for instance and decide to use formula over breastfeeding. The parents may choose to do some form of sleep training, for instance the 'Cry it Out' method at some stage. They attempt to get a routine going for their child. Perhaps a feed only every 3-4 hours. They go for walks with their baby in a buggy and keep putting the baby down for naps. They are training their baby to be more independent you could say, getting them used to the world we live in.

Baby led is the opposite. It is driven by the baby's needs and encompases styles such as attachment and gentle parenting. Most likely breastfeeding on demand. Lots of babywearing. The parent tries to make the fourth trimester as easy a transition as possible for their child. There wouldn't be any sleep training but just knowing the child will eventually get there. Co-sleeping is likely. This approach tends to be much harder on the parents as it's more demanding and they rarely get any time to themselves. However research has shown that responding to your babies needs now helps them become more secure and independent later.

Most parents are a combination of the two I would say. They might baby wear but formula feed. Breastfeeding might not have worked out for a multiple of reasons. Some babies are also "easier" than others which can affect which parenting style the parents end up using. One of the girls from my birth preparation course is able to fed her baby then simply put her down somewhere and she will keep napping and then the mum has time to cook or whatever! Mini would only sleep in someone's arms so naturally we embraced baby wearing. Initially we had been misguidedly trying to space out her feeds (following advice from my Hebamme and doctor) which probably affected my supply. Once I switched to breastfeeding on demand, it led to a happier baby.

I guess we have ended up following attachment style parenting! There were times when I was tempted to give up on breastfeeding as it has made things much more demanding on me but I am glad I have stuck it out as it has gotten a lot more manageable now. At this age babies are more efficient at feeding and don't need to eat as frequently or as long. That said, in general Mini feeds every 2-2.5 hours which is still pretty often! And because she refuses to take a bottle anymore I also can't leave her for long. I was able to go to the hairdresser a few weeks ago though and that was nice, I just had to really hurry!

I am trying to get a bit of a routine going for Mini these days; wake, feed, play, sleep and I try to make sure she naps during the day as we have learnt the hard way that she gets very cranky when overtired! Lately I have also been attempting to get Mini used to the buggy and encouraging her to take some of her day time naps in there and not always on me. It works occasionally! Just this morning I got her settled and napping in the bassinet. However then someone rang the doorbell and woke her up so then I had to wear her in the sling and bounce on the fitness ball for a full 20 minutes just to get her to sleep again!

Now that she is almost four months and getting heavier the babywearing can be a bit harder on my back. Also there is heatwave here so you can end up even more uncomfortable and sweaty. I am gradually hoping to get a little more of a balance going so that I can occasionally have a little "me" time. It can be tricky finding that balance as a parent! That said, I realize this phase where my baby needs me so much will pass and then I'll look back and miss these days. Even though I talk about how challenging it can all be, I still really hate the thought of being away from her for so long once I go back to work.

When there are nights with bad sleep I try to remind myself that this will not last and it will get better. There was actually a few weeks where Mini was doing 4-6 hour stretches and even one night of 7 hours which was amazing but then the 4 month sleep regression started early and now she is waking up every 2-3 hours. Sometimes wide awake ready to party at 5am! If the sleeping still isn't great by around six months then we might have to think about doing some very gentle sleep training. Definitely not cry it out though! That wouldn't be something we are comfortable with. I have been reading a book called The no cry sleep solution for tips. I am hoping that when she is six months and we start solids that I'll be gradually able to reduce how often I breastfeed too. 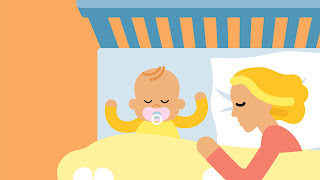 I am lucky that I have a few more months before I have to go back to work so I am generally able to cope with the lack of sleep. Actually we are now co-sleeping, another attachment style parenting thing! The first part of the night I try to get Mini to sleep in her cosleeper cot next to me but then after her first feed I would often find that she wouldn't want to go back into it. There were mornings where I would let her sleep on me, but then I was too scared to sleep myself as I was terrified of SIDS. As time went on I started reading up on safe cosleeping guidelines and I decided to try it last month. Now when Mini wakes I bring her to me then feed her lying down. I lie on my side curled around her and make sure the blanket only goes to our waist. It took me awhile to get used to it but now I find that we both sleep better so that's working out well. It's ideally just a temporary thing though! I realise it could make things more difficult when the time comes to transition her into her own room but we'll face that then. Maybe when she's around one.

It's funny how you have some ideas about how you might parent but when you become one that can all change! I remember a friend telling me how her daughter would comfort feed and I thought at the time I wouldn't let that happen, instead I would give our baby a pacifier/soother. Initially I didn't try giving her a soother though as I had various problems with breastfeeding and I read that could make it worse. After waiting about six weeks I tried to offer her a soother but Mini just wasn't into it! She would make a face and spit it out and cry. I bought lots of different brands but nothing worked. Initially I was a little disappointed but now I think that at least we won't have trouble weaning her off it later on. My Hebamme was against comfort feeding. Her suggestion was that whenever Mini finishes feeding properly and starts sucking for comfort to take her off and put her down immediately so she learns not to do that. I tried that once and she got really upset and then I just ended up feeling bad! I decided afterwards that I'm fine with her comfort feeding if she needs to. When she's upset we may try other ways such as rocking or cuddling but sometimes only offering the boob will do and when it works it's great, it really calms her down, almost like a sedative!

The Hebamme also thought we should keep giving Mini one bottle of formula at night to help us sleep better. I decided not to do that as once I got my supply up, I wanted to exclusively breastfeed if I could. She told me I am making things harder on myself and she's probably right. Mini is such a happy smiley baby now though that it makes me feel more confident in our parenting choices. She's a really fun age now too.She's a lot more interactive, smiling at us and grabbing for toys. I also feel like we know her personality much better so we are able to calm her when she is upset. She has a lot of happy phases now though! I have been considering trying out baby sign language to try to teach her a few words. I'm excited for what the next few months will bring!
Posted by dublinerinDeutschland at 7:12 AM