Part one can be found here. We first met with one midwife, who I'm going to nickname Heidi. She was young, full of energy and really friendly. That helped put me at ease. We were brought into the same room where we had been weeks earlier to register. She asked me about what had happened - what time my waters had broken at for instance and she looked over my files. The next step was to set me up with the CTG monitor to check the contractions and baby's heartbeat. That took about a half hour. Whenever I had a contraction, hubby and I could see numbers going up, usually to around 20. The midwife helped me breath through them. It was painful but I was managing ok.

Heidi didn't check my cervix though to see how far I was dilated and I was surprised at that. She said that because my waters had broken, checking it could cause an infection. She implied that I was still at the early stage of the contractions which I found a bit disheartening as to me they felt strong already and the idea of it going on all day for ages wasn't so appealing! I asked about what other pain options they had, besides an epidural which I was hoping to avoid. She said they can give a painkiller like Buscopan and suggested I could have a bath. She told me that breakfast would be served at 7 and suggested we could go eat then and after come back to her around 8 or so. It was around 6am at that stage.

We were given the keys to a private room where we could hang out basically for the next few hours. It had a double bed, small kitchen area, table and fitness ball. I remember texting my family but apart from my brother in Australia and his wife, everyone was still asleep as it was only 5am in Ireland! The contraction pain was starting to get really bad at that point. I remember second guessing my decision to not have an epidural and wondering whether I would be able to stand it! I decided I would try to keep going awhile longer and then decide. I tried lying down and the time between contractions it was nice to be lying but then when it hit I found that it was better if I was walking around. Trying to breath through the contractions helped. It was hard going! I remember thinking that all the positive thinking I'd read about was all well and good in theory but pain was pain! Trying to think of the contractions like a wave on the beach wasn't helping! I just walked around the room and leaned against a chair and breathed slowly through them. Once I went to the bathroom which was down the hall and I remember finding the walk there and back unpleasant and I had to walk really slowly!

My hubby went to talk to the midwife and was told that if I couldn't manage the pain and wanted help sooner to just let them know. We had only been there around an hour and I wanted to be brave I guess and try to stick it out longer. Especially since I believed I was still only at the beginning stages of labour! At that stage the canteen was open but I had absolutely no desire to go there to try to eat something. Not so long after that I remember feeling really nauseous and then throwing up. There went the porridge I had eaten earlier! Hubby was asking again whether he should go get the midwife and I just said yes, I didn't think I could handle the pain anymore so needed whatever support they could give me!

Heidi came and said they would do the CTG again to monitor the contractions and then they would fill me a bath. We went back to the first room with hubby carrying the backpack I had brought with me for the birth. I had a suitcase for the overnight stay and a backpack with things like snacks, CDs and some nightdresses to change into. Anyway I was set up to the CTG monitor and that was really unpleasant because you had to stay still for it and the contractions felt worse when I couldn't move around! We were left alone and hubby noticed that the contractions at that stage were reaching 100 on the screen. They certainly felt bad! Heidi came back and gave me a painkiller which didn't do much. Some of the contractions were really uncomfortable and I couldn't help but make noises. At the end of the CTG I remember feeling a strong need to use the bathroom for a number two! I said that to Heidi as we were about to go to the room with the bath that I needed to use the bathroom first. She called in another midwife. I'll call her Helga.

Heidi says Helga is going to check my cervix. Finally, I'm thinking! By then I am groaning through the contractions! I get up on the bed and Helga checks my cervix and then says they have to get me to the birthing suite pronto! I guess I must have been fully dilated at that stage. I was happy that I wouldn't have to have hours and hours more of the pain. On the way to the birthing room we passed the bath that had been filled for me. We reached the birthing room and the midwives started quickly filling up the special tub for the water birth. I remember hoping that the water would be filled in time before the baby arrived! I remember looking at the clock and it was 8am. I took off my clothes and got into the tub.

The warm water felt really good! It helped a lot. This time when the contractions came it felt different. Still painful but a different sort of pain and not so bad. The midwives were telling me to push. I was told to hold on to something and pull it during the contraction and push at the same time. Doing that certainly helped and they were telling me I was doing a great job. A contraction would come, I would pull on the handles of the bath tub while trying to push until the contraction passed. At one stage they said they could see hair on the baby's head! Helga suggested I touch the baby's head and I did but I felt weird about it to be honest! I was nervous about hurting the baby in some way so didn't want to keep touching it! The pain of the pushing got worse and several times I would try but I just couldn't seem to do it. Helga suggested different positions such as squatting down but I found me half lying /sitting with my feet against the sides the most comfortable. Heidi was very encouraging but I found Helga a bit too critical and bossy! She asked me what was holding me back. I said I was worried about the pain and she said there is plenty of room for the baby to get out and there is no going back now.

Part of me did want to stop at that point but I also reminded myself that the baby needs to come out and I have to do this! I had been in the tub a long time at that stage and Helga said if I don't get the baby out soon I would have to get out of the tub. That worried me. I really wanted the water birth to work! Also I was scared if I couldn't get the head out that I would have to be cut. I tried even harder to push during the next contraction but I just still couldn't seem to push hard enough! The more I pushed the more painful it felt which made me not want to push physically even though mentally I knew I had to! Hubby kept telling me I could do it and being encouraging. He told me later that he could see the baby's head go out and in again! Anyway eventually I somehow was able to push hard for long enough and the head came out! Heidi said the baby had her eyes open in the water looking at her! The next push was enough to get the body out and then the midwives were handing me a slippery baby!! It was 9.13am.

It just felt surreal to me! Like oh wow, I can't believe this is my baby!! She cried a little but then stopped. Hubby and I were both just looking at her in amazement and I think I was saying things like "welcome to the world! We love you so much!". She looked pretty wrinkly and I remember thinking she reminded me of my granny, haha! Eventually hubby cut the cord after it stopped pulsating and the midwife suggested he do skin to skin while they helped me out of the tub. I was taken to a bed and then I had to give birth to the placenta! That was fine though, just another push like earlier and it came out. The midwives examined me and said I would need some stitches so I had to wait for the doctor. I didn't care though, I was just so in amazement of our daughter.

Hubby took some photos and we told out families the good news and everyone was delighted! The doctor came and gave me some stitches (I'd torn a little) but I barely felt it. Then they took our baby to be weighed. She was 2.9 kilos and everything looked good. Ten fingers and ten toes! The midwife wheeled me in the bed holding our baby to the ward. I was just so delighted the birth was behind me, that it had gone so well and that our healthy daughter arrived safely. 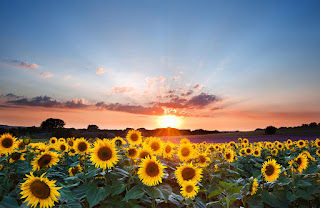 Posted by dublinerinDeutschland at 11:50 AM

Email ThisBlogThis!Share to TwitterShare to FacebookShare to Pinterest
Labels: birth