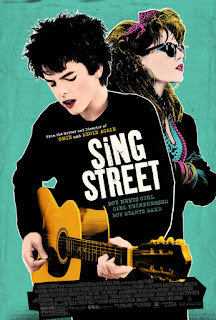 One of the movies that stood out for us last year was "Sing Street", a low-budget Irish movie. Often I find that there are so many huge blockbusters full of special effects and fight scenes these days that I miss the simpler films with more of a story to them! Sing Street is set in Dublin in the 1980s and as someone who grew up around then, I enjoyed feeling nostalgic watching it. A bit like how "Stranger Days" the Netflix series was also set in the 80s. Both reminded me of the time before smartphones and constant access to internet, when you would go out all day with your friends on adventures.

Sing Street revolves around a 16 year old boy who moves to a new school. Life is hard. There's a bully, a principal who has it in for him, and to top it off his parents might be getting a divorce. He soon falls for a 17 year old girl who wants to move to London and become a model. In order to impress her he decides to form a music band and make videos together. That's all I'll say without spoiling anything. The music was really good. I've even been listening to the soundtrack since ("drive it like you stole it" is the name of the catchy theme song). Dublin also looked lovely in it. Overall it was just a fun film that left you in a good mood after watching.
Posted by dubliner in Deutschland at 10:24 AM