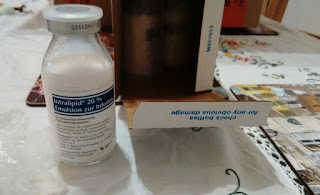 On Tuesday I got my first intralipid infusion done. This was for my elevated natural killer cells. When the doctor inserted the needle into my arm it was sore for a few seconds but otherwise the whole thing was painless. The speed at which the solution was dripping was set extra slow since it was my first time getting it done and it lasted 2.5 hours altogether.

The GerMann came with me since the doctor said I should be accompanied the first time. Just in case something went wrong I guess. I was glad he was there to keep me company as it was quite boring! I had also brought some snacks with me as other women who had gotten the intralipid infusion mentioned feeling hungry. Later that day once we got home I felt exhausted. That could have been a side effect but it could also have just been from the stress of the past week!

Oh man, where do I start? So the first intralipid was due between days 5-10 of my cycle before I start IVF again. When we had the phone call with the immune doc several weeks ago we had explained the timing of things, that we wanted to do IVF in December. She assured us that we would receive the treatment plan and prescriptions in two and a half weeks. I worked out that should still give me a week to get the intralipid meds in time for the first session. 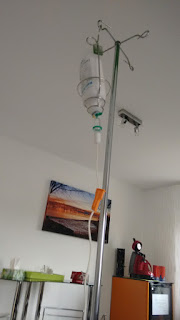 Firstly I didn't realize that getting the intralipid solution itself would be difficult. I asked at two pharmacies here. One took my number and called me back saying it's called Clinoleic in Germany. When I looked up the consistency of that, it's made from different ingredients so I decided it would be better to stick with the exact medicine I had been prescribed. The other pharmacy just said a flat out no they don't have it. The immune doctor had mentioned it's possible to order the intralipid from Austria. I looked up some pharmacies and contacted two in Austria, one in France. One didn't have it, the other said you can only pick it up from there, but the third said they have it and once I send them the prescription they can send it out and it should only take 1-3 days to arrive in Germany. Great.

However three weeks passed and I still hadn't received the prescriptions and treatment plan from the immune doctor. The GerMann phoned and was told that despite our files being marked as urgent, they still hadn't been processed! I asked him to phone back and ask whether they could at least scan the intralipid prescription and send it by email so that I could order the meds in time. They did that though it took another two days for some reason. Once I got it I immediately send the prescription to the pharmacy and ordered the meds. That was last Wednesday and I knew my first infusion should be the following Monday ideally. I did think that if it ended up being a day or two late, it probably wouldn't make a big difference but I wanted to follow the doctor's recommendations ideally as closely as possible. (It didn't end up arriving until Monday but luckily just in time for my appointment on the Tuesday.)

In the meantime I'd been having trouble finding a doctor who would administer the infusion! Initially Dr. Direct at our fertility clinic had said I could get it done there but then during the phone call with the immune doc she mentioned he had written to her saying the opposite! I wasn't sure whether he had sent the letter before or after our appointment with him so we decided to try to find another doctor just in case. The immune doc had suggested we try a regular GP and I'd seen on a facebook group I'm in for German women dealing with infertility that most of them just got the intralipid infusions done with their local GP, no big deal.

That would have been too easy though! We went to my local doctor (I bought hubby along to help explain it all in German). I knew this particular doctor was pretty anti alternative in general but I figured it was worth a try since the location would have been so handy. Disaster. We started by explaining the blood test results and the recommendation for thyroid meds. She said she had read mixed articles about the ideal thyroid values for pregnancy and isn't convinced that my levels are too high but she reluctantly agreed to give me that prescription and I can come back in six weeks for another blood test there to check my values again. Then we bought up the intralipid treatment and she was totally against it! She called the whole thing "hocus pocus" basically and said she understands our need to "clutch at straws" but we should be wary of people trying to take our money for some new treatment without enough clinical trials. She didn't come across as being very understanding or sympathetic and afterwards I felt pretty pathetic.

We decided to try my other GP in a different part of town next. Yes, I have two since sometimes I can't get an appointment at the one in town and then the local one is handier. Anyway the other doctor was a lot more understanding. She seemed to comprehend how the natural killer cells could be too high and prevent an embryo from implanting. She said she would phone the immune doctor to talk to her about it and then call me to let me know in a few days. It seemed quite promising that she would agree and I felt sure that the immune doctor would explain the whole thing to her and persuade her. Anyway several days came and went but still nothing. The GerMann mentioned that it's very hard to get through to the immune doc so maybe she I should give it more time. After a few more days, I phoned the doctor myself. The receptionist told me that the doctor had said that I can't get it done there and that I should rather ask my gynecologist. It was Thursday at this stage and I was meant to get the first intralipid done by the following Monday, so I was definitely starting to feel stressed! The GerMann and I couldn't get through to our fertility clinic by phone so we wrote an email to Dr. Direct explaining we weren't able to find another doctor and could we get the intralipid done there asap.

He replied saying as per the letter he had written to the immune doctor, he wouldn't administer it in his surgery. Just a short email, no reason. At this stage I was definitely starting to worry! Neither hubby nor I were impressed with our fertility clinic doctor for not helping us out. The other clinic where we had considered going for a second opinion but didn't in the end support immune treatments there. But anyway we wrote a super polite email back saying we had tried other doctors but couldn't find any and thought we could do it there if we were stuck, and could I at least get the first intralipid infusion to give us more time to find someone in time for the next one two weeks later. Then his receptionist phoned and explained that they just don't have the capacity at the moment and that's why they can't help. They wouldn't have anyone to check on me while I was getting the intralipid and they are sorry. So then I emailed my gynecologist who was on holidays explaining the situation but I knew we wouldn't get a reply in time.

Next hubby phoned the immune doc to ask if she knew of any doctors in our area who might do it but she said that she's had other patients from where we live who also couldn't find any doctors willing to administer the intralipid at their practice. So we ended up having to make an appointment to get it done at the immune doctor's practice. We made the appointment for Tuesday, to make sure I'd have the intralipid meds by then (just as well since they didn't arrive till Monday mid morning!). Considering I needed someone to accompany me and how far the immune doctor's place is (two hours with public transport or an hour by car), both the GerMann and I had to take a day off work. I do have a few days left till the end of the year which I'd been saving in case I needed them for IVF so it wasn't too hard getting the time off but it was still awkward and not ideal since I'll need to get the intralipid done every two weeks.

Anyway, so we rented a car via car sharing and the GerMann drove and everything went fine in the end (apart from some arguments in the car. I was using my phone GPS to navigate and there was some miscommunication over when he was meant to take some turns! We ended up missing our motorway exit and taking a slight detour). We made the next appointment there at the same place for my second intralipid which is due in two weeks just in case we still can't find another doctor by then. This time they had an available appointment for the afternoon so I could probably manage by only taking a half day not full day off work.

The immune doctor also gave us a letter to give to the next doctor we ask which says that I had no bad reactions from the medicine and explaining what needs to be done. I scanned it and emailed my gyno again. He still hasn't replied and it's been a week. I'm wondering whether my emails might have ended up in his spam folder! I guess I'd better try to phone tomorrow to find out which also means probably trying to explain the whole thing in German to his receptionist on the phone. I wish getting the immune treatment wasn't all so difficult! Overall I am happy the first intralipid infusion went well though and I guess I'll manage somehow even if it means taking half days off work every two weeks.

There were some baby albums in the waiting room at the clinic full of photos and letters from previous patients who had been helped by the immune doctor. It was really nice reading some of the stories! One wrote that words can't express how grateful they are for the help and that they now have their wonderful child. Another letter in particular stood out. 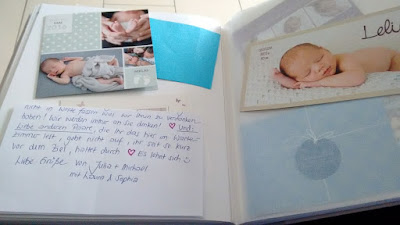 Dear other couple who are reading this in the waiting room, don't give up. You are so close to your goal, keep going. It is worth it!

Normally I hate the "never give up" advice you often see on infertility groups, usually said by someone who has their baby because the fact is infertility treatments don't work for everyone. Also there is nothing wrong if a couple reaches the point where they decide to stop and accept a childfree life. That is a brave move. However reading that letter and the others made me wonder whether maybe we are close to being parents, that this might just work for us... And I ended up getting quite teary and emotional in the waiting room! Will we be sending a baby card to the immune doctor thanking her for her help in a year's time? Only time will tell...

Posted by dublinerinDeutschland at 12:09 PM