Brexit and the aftermath 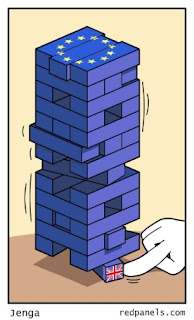 By now unless you live under a stone, you will have heard about Brexit. On Thursday the 23rd of June the UK voted on whether or not Britain should leave the EU. I really thought that the "remain" vote would have the majority and when I went to bed that night it was looking that way but then I woke up to a different and somewhat bleaker world Friday morning.

The decision won't affect me that much directly since as an Irish citizen I can still benefit from being an EU member. In my case this has meant freedom to travel to Germany, another EU state to live and work. My university master degree was also mostly subsidized by an EU grant.

The majority of people in Scotland voted to remain in the EU but because they belong to the UK that means they will also have to leave so now they are planning to have a referendum to potentially gain independence. A similar situation is happening in Northern Ireland. Even though I find the idea of Ireland finally being one united country a nice one, I worry that a referendum about independence from the UK could be very bad for the relatively recent peace in that area and it could cause things to become volatile again. 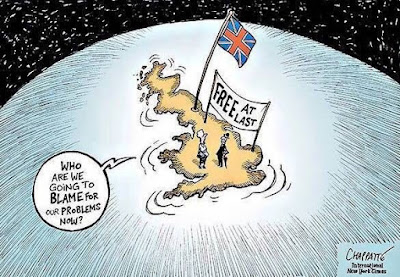 The Brexit campaign was also filled with a lot of lies and xenophobia. There has been mass immigration all over Europe the past few years by millions of refugees and I understand that a lot of people have some concerns about how this will affect their country but leaving the EU in order to "close the borders" is not the way to go about it. It's not fair for Britain to enjoy the EU freedom of movement by having its citizens travel freely around Europe but then prevent people from going there. It scares me that some horrible racist views similar to things Trump would say have also been gaining power around the UK.

It even turns out that some people were misinformed and didn't fully understand the implications of what they were voting for. One of the main arguments used by the for Brexit crowd was that Britain sends 350 million euro to the EU per week and if they were to leave the EU they could instead give that money to the NHS, the UK health care system. I can understand why that idea would appeal to a lot of people. But it was a lie! After the Brexit vote Nigel Farage was interviewed and admitted saying that saying such was a "mistake" and he cannot guarantee the money would go to the NHS. 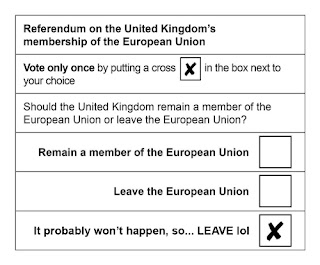 There have been some people who voted for Brexit who now say they wish they could take it back! There is even a petition online to have a second referendum, and as I write this it currently has over 1.6 million signatures. After the voting results were announced the top searched for item on google was "what is the EU?", which clearly shows a whole lot of people who were not so sure about what they were even voting about! Some people have said that choose leave but only as a protest vote, not really thinking that their vote would count.

Since Brexit the British pound is down by 9% crashing to its lowest level in 31 years. Shares and pensions have also been negatively affected. The implications of Brexit is being felt by everyone around the globe. What a mess!

Posted by dublinerinDeutschland at 2:10 PM