Silly question of the day 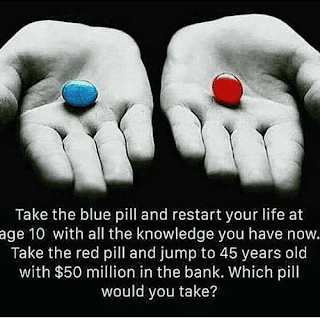 This question was doing the rounds on social media recently. If you had a choice of taking a blue pill and restarting your life at age 10 but with all you know now, or of taking a red pill and waking up age 45 with 50 million dollars, what would you choose?

I did think about it for a moment but to me it's clear, I would go for the blue pill! Why would I want to wish the next ten years of my life away? Sure I would get a million dollars but so what, to me the years in between spent with friends and family are a lot more valuable! I do realise that being in a position to turn down a million dollars probably also shows that I already have a certain amount of privilege. I have a roof over my head and plenty of access to food and health care. I'm sure there are lots of people who would be desperate for the money for various reasons.

Life is short and the thought of getting more time is appealing. That said, I don't particularly like the idea of having to start at age 10 all over again! I would have to go through the teenage years with all those crazy hormones, immature friends, not to mention exams which doesn't sound particularly appealing. However I have gained a lot of knowledge by now that I think I could manage it!

The main advantage for me of course would be the opportunity to spend time with my late Mum again. She passed just before my 23rd birthday. The idea of getting another 13 years with her would be amazing. And this time I would make sure we have more quality time. The idea of having to watch her get sick again is hard though, but maybe with my knowledge I could send her to the doctor earlier so she could get diagnosed sooner. I would try to be a better daughter this hypothetical time too.

I also wouldn't care as much about what other people think of me. As I've gotten older I've realised how little that really matters and that you should rather be true to yourself.

I would invest in shares, haha! Google, Facebook, Apple... maybe that way by age 45 I'd easily have saved a million dollars.

I was considering whether I would study something different at university for a total change but then I realised that the subjects I picked (German among others) ended up leading me down a path where I met my now husband and moved to Germany. I'm very happy with these decisions so I'd probably be better off studying the same topics and not changing any of the big life choices I made in the past.

It is also possible that maybe I would drive myself crazy trying to stop awful events which I would know in advance about. There's this character from ancient Greek mythology called Cassandra. She was given the gift of foresight but no one ever believes her so it becomes a horrible curse.

Which would you pick if you were given the choice? I guess choosing neither is also an option.

Posted by dublinerinDeutschland at 12:48 PM