Since December 16th we have been in our second lockdown here in Germany. Similar to the first one in March, we suspected beforehand it might happen but then it still seemed to be announced very last minute. I wasn't really meeting up with people anyway due to Covid-19 restrictions, although I had planned to meet a friend in her garden for a mulled wine and another friend for a playdate. Both had to be cancelled once the official lockdown started. Since then hubby and I have been at home with Mini most of the time. We get as much as possible delivered to us. We only leave the house for walks or to go to the playground. Life can feel quite repetitve at times! Like I mentioned in this post I was determined to make Christmas special despite being in lockdown.

This was our fist Christmas away from both of our familes and the first one where Mini, who is now almost 3, had a basic understanding of what was going on. It actually feels a bit surreal being on the "other side" of the experience. There is a certain amount of responsibilty in making sure that Santa's presents arrive, are hidden and then are wrapped and under the tree on time! At one stage in December I realised that Mini knew all about Santa and presents but didn't know about the birth of Christ! We didn't have her baptised but I still have been trying to teach her a basic understanding about God and the Catholic faith. Luckily I had a nativity book which we read. The next day she told me her doll was called "Baby Jesus". I couldn't help laughing when I heard her say "Baby Jesus, do you want to build a snowman?"

A women I knew was collecting stuff to bring to a local womens shelter and when she mentioned there was a 2 year old there at the moment, I was able to use it as an opportunity to go through some of Mini's old toys and clothes and ask her to help pick out some things I could give to the little girl who didn't have as much. I'm trying to raise her to be grateful for what she has and also be charitable to others. Apart from that I also tried get into the Christmas spirt as much as possible myself! We decorated the tree (although that was put up already in November), we baked cookies, read wintery stories and sang and danced along to Christmas songs as often as possible.

We celebrated both Christmas eve (which is the main day here in Germany) and Christmas day (which I'm more used being the main day coming from Ireland). It ended up being a really nice Christmas. We didn't have to fall in line with anyone else's schedule or timings, so that made the day very relaxed for one. We opened presents, wore out Christmas pjs and watched movies. We weren't able to get a turkey delieverd unforuntaltey so we had roast chicken but it was very tasty anyway! I also found a jar of sweet mincemeat so was able to bake my favourite Christmas dessert, mince tart!

I also celebrated a birthday myself over Christmas. It was a little disappointing, I'm not going to lie. Last year I had been able to meet a bunch of close friends and go for birthday brunch and this year I wasn't able to meet anyone due to the pandemic. We had a cake though and I drank my favourite wine so that was still nice. Hopefilly next year I'll be able to have a much bigger celebration! 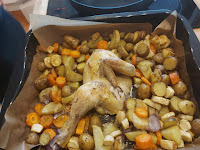 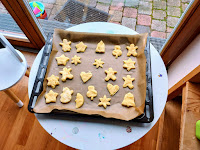 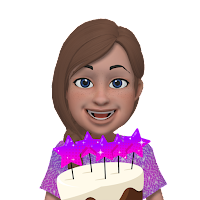 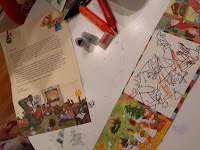 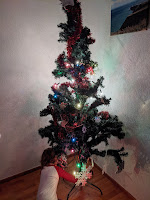 I'd love to hear from my readers, how was your Christmas?

Posted by dubliner in Deutschland at 7:08 AM