This week since I've been feeling good I arranged several meet ups with friends. Since most of the people I know here already have kids, a few have kindly given us lots of their old baby clothes and various items. One friend brought over three bags full of little girls clothes! I'm delighted to get all the stuff, certainly all the various baby paraphernalia can be really expensive, but I also really want to buy some things for our child too. At the weekend we took a trip to a baby shop and had a look around. It was all very overwhelming to be honest! There are so many potential things to get. I'd like to try to be a bit of a minimalist parent and only buy things that we'll actually use.

I've still been getting pretty bad heartburn these days, nosebleeds and leg cramps. Also I've noticed I often wake up early but then can't get back asleep. Those are my only real "complaints" at the moment and none of those are that bad. I've been lucky that the second trimester has been fairly smooth sailing and I'm grateful for that.

I had no idea that buggies cost so much! You are talking 800€ plus for the nicer ones. And even though we don't own a car we occasionally rent one so it could make sense to buy a baby seat. Those are 100-300€ and only for the first year. From age one to three you need to get another one. I certainly don't want to buy stuff we don't need so I'm trying to work out which items we will actually use and which aren't necessary. For instance, instead of paying several hundred on a special changing table, I'm thinking of using the top of a chest of drawers. There are some markets here where they sell used items so it might be worth checking them out for certain items. In Germany when you cycle a lot with kids you can buy an attachment for your bike. Very handy though these can cost around a thousand!

We will need to apply for the play schools here before the baby even arrives apparently as they really do get booked out fast. You need to fill out a form and register for your favourite seven then also go to them in person, plus it helps if you know someone. There's one place which has a good reputation and both English and German are spoken which would be ideal.

Only two more weeks till I reach viability stage! How cool is that? So I have decided to go to Ireland one more time before the baby arrives. I know we had decided earlier on in the pregnancy that I wouldn't travel anymore but that was when we were still feeling a lot more insecure about everything. At this stage we are both feeling more confident and I've been a bit homesick lately. This will be my last chance to go back during the second trimester and then I won't travel anymore in the third trimester. 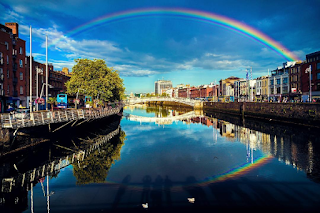 The flights aren't so expensive this time of year and it will be nice to go back home for a few days. Hubby won't be able to come with me unfortunately. I'm going to travel light, just a carry on. It will be fun to spend a few days with family and friends. I think that ideally people shouldn't travel in the first or last trimester but the middle seems like a good time. It's only a short flight to Ireland anyway. I have another check up at my doctor in two weeks and then once I'd get back from the Ireland trip my next appointment would only be two weeks later. Obviously if I have any issues while away or after the trip I would go straight to doctor/hospital. But lately everything has been going great with the pregnancy, no issues. I'll just try to make sure to take it easy during my visit. There have been times when I've felt like I needed another holiday after a visit home as I'd be so busy going here there and everywhere trying to fit in meet ups with everyone!

I recently got a new passport - my first one with my married name. It was relatively simple - it just involved filling out a form and sending it to the Irish embassy in Berlin with photos. I had to get my signature witnessed but luckily I had a friend who fit the criteria and had the stamp so it was all fine. I'm not that happy with my new photo though, I look extremely serious and a little grumpy! That's just my resting face I guess, haha. Oh well, I doubt many people have a great passport photo.
Posted by dublinerinDeutschland at 7:04 AM