week 19 - a scare and a family visit #pregnancyDiary


The pain which I thought was round ligament pain came back and I had it for several days. I asked some friends again about what they had felt and looked at my facebook group and most seemed to describe something pretty similar to what I was feeling. It was particularly bad one day though so I decided to text my Hebamme and ask her about it. She said that the pain from the round ligaments is normally in the lower pelvis area not near the hip as I'd mentioned. At that stage I started getting worried. I didn't want to waste the doctor's time, however I also didn't want to wait another two weeks till the next scan and be worrying about it so the next day I got to his practice at 8am when it opened and mentioned the pains. I ended up having to wait about an hour since I didn't have an appointment.

What I thought would happen.
I expected to describe the pain and for the doctor to reassure me that it was normal pregnancy pain and then to go about my merry way.

What actually happened.
The doctor was concerned as the area I was having the pain is near my appendix. He also saw some fluid on the screen that he couldn't explain near my intestines. He said he would try to get me an appointment at a specialist immediately to get it checked out. The other doctor was nearby and I was able to get seen to quickly luckily. I was starting to feel very nervous about what was going on at that stage. Hubby was still away so I was just phoning him to tell him what was going on. The other doctor didn't think it was appendicitis but he couldn't rule it out. He advised me that if the pain got worse I should go to the hospital immediately! He saw the mass of fluid on my right hand side and he didn't know what it was. He told me to come back the next day for another appointment. In the meantime he took my blood to be sent to the lab to check for any signs of infection.

The rest of the day I couldn't help but worry. Like I mentioned earlier, hubby was away so I was dealing with all this on my own. I was whatsapping family and close friends from home to let them know what was going on and my mother in law was also calling me. She was getting really anxious and I felt like I had to be strong and try to reassure her! She said she would come immediately if I ended up having to go to hospital (she lives in a different town). Luckily the pain didn't get any worse. Trying to google what the fluid mass could be was a bad idea as I started seeing results about tumours and freaking out about cancer! I'd read a story recently about a pregnant woman who got cancer and had to choose between getting chemo to save herself or not and saving the baby. I don't know how people handle decisions like that! I was also thinking that I don't want to have to go to the hospital to get scary tests done, especially on my own. A normal boring day in the office had never sounded so appealing to me!

That night I managed to sleep for several hours but I woke up then feeling really worried about it all. I packed an overnight bag on the advice of a doctor friend just in case I'd be sent to the hospital after my appointment. There was a long wait at the practice. Finally I got in and he asked how I was feeling. Nervous I said! The pain was the same. My blood test results had come back only showing a slight infection elevation which could just be from a cold. That was good news as if I had appendicitis the results would have looked worse. The doctor did a scan and after several agonizing minutes said that I had an intestinal partial blockage. That's what's been causing the pain. I should massage my tummy clockwise to help digestion and eat simple meals over the next few days. Pregnancy pushes the intestine up into a smaller space often leading to digestion issues. My previous adhesions from surgeries are probably not helping things either.

I was told to come back after several days for another appointment but for the time being all was fine. I didn't have to go to hospital that day which was a relief! Of course he mentioned again that if my pain gets worse I should go straight in and he gave me a printout of my blood test but for now I was able to go back to work. I'm relieved it's not a tumour or something serious! That said if I do end up getting a full intestine blockage that would be a dangerous situation requiring surgery. So I am a little worried about that possibility at some point especially as the pregnancy progresses. For now I'll keep up with the tummy massages to help digestion and watch what I eat.

So at the end of the week I had my third appointment at the doctor for a checkup. He could still see the strange fluid on the screen. I tried to ask more questions this time. The fluid is in my small intestine he says. I also have a lot of air in my intestine which will cause cramps. He said I can eat normally now though still try to avoid food with a lot of "air" such as beans and cauliflower. And then come back in two weeks for another check up and at that stage he'll test my blood for signs of infection again. The pains I was getting have improved significantly recently thankfully. So it looks like for the moment everything is fine and I can breath a sigh of relief!

While I was going through the scare it was also harder as I was on my own. Hubby was away with work. Now he's back and it's been really nice. Also my Dad and sister came over to visit me! They stayed for four days and it was just perfect. They even got quite nice sunny autumn weather while they were here. We went to a pumpkin festival in Ludwigsburg and there was even a wedding fair on that day which we checked out for my sis in case it gave her any ideas.

Another day the weather was warm so we went to the pool for a spa day. I avoided the sauna but enjoyed swimming! We also took my family to some of our favourite restaurants and they had some good meals. It was sad saying goodbye though as I won't be flying to ireland again until the baby is here and a few months old, so it'll be my longest stretch not going back "home". It's great these days with skype, whatsapp and google hangout though, you don't feel as far away as you did in the past.

So the week started off scary with the pains and doctor visits but ended really lovely enjoying some family time. Here are some pictures from our day at Ludwigsburg exploring the castle grounds and pumpkin festival. If you are ever in the area it's worth checking out. The festival takes place every year around September and October. 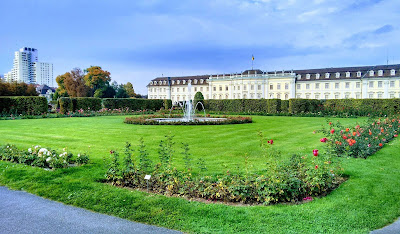 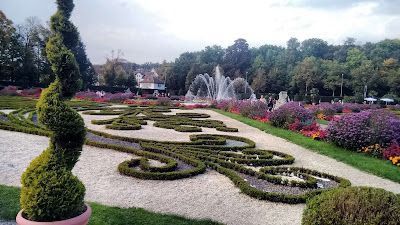 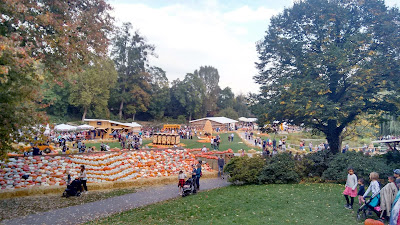 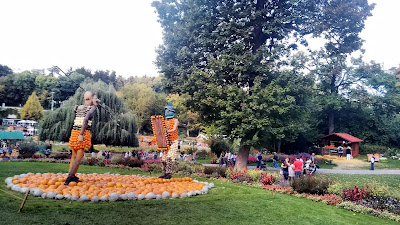 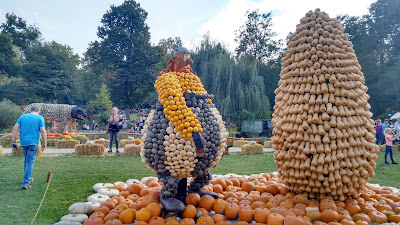 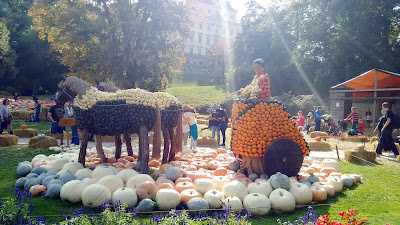 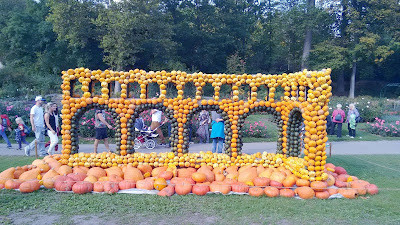 Posted by dublinerinDeutschland at 3:33 AM