Last night it took me ages to fall asleep and I also woke up early, at 7am which isn't like me on a Saturday. I think it was the nerves. Last time around the clinic had phoned me around 11am with the fertilization results so I was expecting the call around the same time. However they phoned while I was in the shower and my phone was on vibrate so hubby also didn't hear it. I tried to call back but it was displayed as "private number" therefore I wasn't able to and since it is outside of the clinic's opening hours I haven't been able to get through to them since.

I can't believe that they didn't phone me again or leave a message! It would be nice to know for sure whether we have an embryo growing at the moment so I can at least relax this weekend and not be worried, but I just don't know now. I am hoping that if the egg did not fertilize that they would make an effort to get through to us on the phone because that would be beyond awful if I ended up showing up there bright and early Tuesday morning (Monday is a holiday here) only to find there is nothing to transfer.

Since we would only have one embryo unlike two like last time our chances of it working have decreased. They say it's only about a 13 percent chance with one, whereas it can be 33 percent with two. It's possible that getting the endometrial scratch several weeks ago increased my odds, let's be optimistic and say it doubled them, but that would still only bring the odds to 26% which doesn't sound that good. That's the thing with IVF though, the chances of a round working are never great but we try anyway. 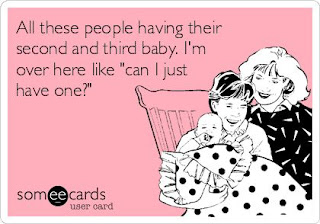 Posted by dublinerinDeutschland at 8:50 AM