According to my app I am already in the third trimester this week. However other websites often count the beginning of the seventh month from week 28. Either way I am grateful for each day my baby keeps growing! I know a few stories of children being born preterm and it can potentially cause health issues. I've been enjoying feeling our little lady kick and move. She's particularly active at night, sometimes even keeping me awake, haha! The other evening we were watching tv and I could see an indent on my left hand side as if a foot or elbow was pressed against it and it felt hard to touch for a few seconds until it went back in again. Another two weeks until my next doctor's appointment which should hopefully include a scan! I am starting to feel a lot heavier in general and it's very nice to put my feet up at the end of the day.

Written later in the week
Well I ended up having another scare this week! To close the second trimester with a bang. I left work one evening and started having these really painful cramps on my way into town for a pregnancy massage appointment. It felt like bad period cramps but a bit higher up. At first I thought the pain was continuous, it was certainly very unpleasant but then I realized that the cramps would get worse every so often and then ease off. Sort of like I would imagine contractions to be like! There didn't seem to be much of a break in between and I started getting really anxious wondering what I should do. I called my husband and he thought I should cancel the massage and go to the hospital to get checked out (at that stage my doctor's practice was closed).

When I got to the massage appointment the pain was still there - it had been almost an hour. The masseuse who's like a holistic therapist said that it wouldn't be good to do the massage with me like this and suggested we postpone which I was glad about. So then I made my way to the hospital. Tt wasn't that far off since I was already in town. However my sense of direction has never been my strong suit and I ended up getting lost finding my way there! I tried using google maps with my GPS but it seemed like I kept walking the wrong direction. Anyway I found my way to the hospital eventually but then got lost again looking for the women and children's clinic. At that stage my husband wasn't too far away so I decided to wait for him and go in together. He also brought my "Mutterpass" with me which is the booklet they give you here when you are pregnant with all your relevant info. By the time I had reached the hospital the cramps had stopped and I felt fine again. So then at first I wondered if I was overreacting going there but then my overactive imagination started worrying that maybe the pains were a sign that the baby was in distress or choking on the umbilical cord and I started feeling really nervous!

We were sent straight to the labour ward to get checked out. The staff there were lovely. I was hooked up to a machine to measure contractions and mine and baby's heartbeat for around half an hour. Hearing the little heartbeat was reassuring. My temperature and blood pressure were also taken. We were also asked lots of questions about our medical history. It's good they have my info on file now. If you go into labour before week 36 you have to automatically go to that particular hospital. If it's later then you have a choice of other hospitals to give birth in. Next we had to wait for a doctor to analyze the results. 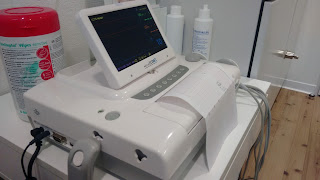 Eventually we were called in and I was told I'd get an ultrasound. There were two women in the room who I thought were doctors but I think now that one was probably the ultrasound technician and they must have been still in training. They asked me a series of questions and then started the scan. It was reassuring to see the baby on the screen. The ultrasound technician spent a long time looking at the baby's stomach and then she commented to the other girl in front of me (they were both quite young) that it looked like the heart and stomach were in the wrong place!! Like on the wrong side. Jeez! That's not what you want to hear. So then the other girl phoned another doctor to come down to take a look. Of course I was thinking oh my God, something is wrong with the baby at this stage and praying all would be ok! The girl then told me it's nothing serious, not to worry but of course I was anxious. She'd asked if we had had some kind of thorough scan already and I said the ones that are done at 12 and 20 weeks at the gyno. That didn't seem to be the one she meant though.

Anyway the other more experienced doctor came down and he was very friendly. He did a really thorough scan and it was clear then that he was also teaching the other girl. Like, here is the heart, here is the stomach, all perfectly normal etc. Thank God! He was really nice too, cracking jokes and just putting me at ease. We saw the baby yawn and taste the amniotic fluid! But the real highlight was when he used the 3d scanner and we got to see our baby's face. That was just incredible. She looks like a little person! It's so different from just seeing the black and white 2d images. She even had a little grin in one of the pictures.

We didn't get home until about 10.30pm that evening and we were exhausted by that stage but so relieved and delighted that all is fine and that baby is doing great. The doctors think it must have been practice contractions I had. My cervix is still closed so all is fine. I feel like a bit of a wimp though because I found those contractions really painful! I am hoping to have a natural birth without an epidural, you see. However it was probably extra uncomfortable going through the pain while sitting on the tram on my way into town. If I'd been able to get into a more comfortable position or have a bath for instance it might have been more bearable!

I only had a small snack before going to bed that night but then woke up feeling ravenous. I thought it was the morning already but when I looked at my phone it was around 2.30 in the morning! Ignoring the hunger wasn't working so I got up and made myself a quick bowl of porridge. Poor hubby got worried when he noticed I'd left the room but I told him everything was fine, I just had to feed the baby! I'll have to try to make sure I eat enough in the evenings before bed. Getting up in the middle of the night didn't bother me at all as I was still feeling so relieved that everything is fine with our little one. The next day I was extra tired in work though! So sort of a dramatic week but thankfully things progressing as they should. Hopefully the next few weeks will be calmer!
Posted by dublinerinDeutschland at 9:50 AM