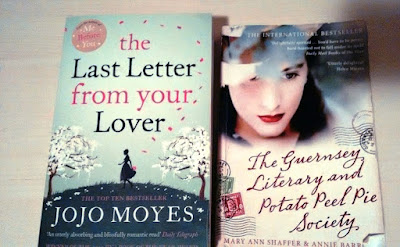 I read two books a while ago for my book club which were too good not to share. With both I found myself immersed in the worlds created, I loved the characters and didn’t want the stories to end! Jojo moyes is the author of the well-known book and now movie „Me before you“. I enjoyed her writing and decided to try another one of her books, entitled “The Last Letter from your Lover”.

This novel mainly tells two stories. One set in the 1960s and centres around Jennifer Stirling, a wealthy married woman who wakes up after an accident having lost her memory and tries to put the missing pieces of her life back together when she discovers some old correspondence from a mysterious lover. In 2003 Ellie, a young journalist stumbles across these old now lost love letters and the two women’s lives intertwine. The book was well written and tells of an amazing love affair. Of course things are never simple and there were lots of clever unexpected and unpredictable twists. Overall I found it a satisfying read which I personally preferred to “Me before you”. I've since ordered another of her novels, "The Ship of Brides", which also has an interesting premise and is set in the past.

The second book I devoured in just a few days was “The Guernsey Literary and Potato Peel Pie Society” by Mary Ann Shaffer & Annie Barrows. It centres around Juliet Ashton a writer in post World War two London who begins a correspondence with someone in Guernsey which had been under German Occupation during the war. The book is told through a series of letters back and forth between various characters which initially I found quite unusual but as I got more into the story, the letter style suited it perfectly. All the characters in the book really come to life and I loved being transported back in time before the art of letter writing has mainly fallen to the wayside. Books don't often make me cry but I did shed a fear tears at a particularly sad moment. Reading some of the stories about the war, the sort of things that did actually happen, was hard. Overall an interesting and heart-warming read.

Let me know if you read either books and what you thought if you did! Or if you can recommend anything else.
Posted by dublinerinDeutschland at 9:38 AM